One of my versions of paradise, that is.

Jay and I have moved to another small town, but oddly nowhere near "town".  Our address says we live in said small town, but in actuality, we're probably eight miles from "town".

I absolutely *despise* moving and God willing, this will be our last move until we move into our forever home (God willing, we'll be able to buy/find a forever home sometime before we die).

We moved onto the same property where Skeeter (and her future brother) lives.  She's now 10 yards or so from my bedroom window, so I can wake up, look out the door and see her.  It's quite blissful.

Our friend (and landlord) lives on the property as well, in a beautiful big old farmhouse just west of our house.  We downsized a lot to move into our apartment two years ago, but this little house is even smaller than our apartment, so we had to downsize yet again.  It's not too bad. Once you learn to let go and take that first load to Goodwill, the subsequent loads are much easier.

We still have a ton of unpacking to do, though I'm not sure where we're going to put everything yet, and we're going to "build" some cabinets for the kitchen.  Right now, we've got a big, open kitchen with next to no storage or counter space.  We're going to take a page out of Mom and Bill's book and just bolt a couple of base cabinets together and cover them with a counter top and call it good.  It's not super permanent, but it will increase our storage and give us a food prep area.

The big wooden table that is currently the "counter" in the kitchen will come out and be re-finished so that we can turn it into a picnic table.  I can already see it underneath that wonderful shade tree, can't you?

I expect it will be a bit before we're completely settled, but I'm already in love with this place.
Posted by GunDiva at 9:46 AM 3 comments:

The Rural Life Suits Us

When Jay and I met, I swore I would never live east of I-25.  I was a mountain girl, pure and simple.  I had to have my mountains, period.

But then we moved out east.  Not far, only about 19 miles from my home town and I immediately fell in love.  I still must have my mountains, but now I live just far enough away that I get to see them.  My drive in to work every day has the best view ever and we're not so far away that I can't get a "fix" whenever I want.

I also get to pretend to be a farmer on occasion, which I love.  A friend of ours has a "small farm" that we get to house-sit when her family is out of town.


So when that same friend asked if I wanted to come help out on branding day, I jumped at the opportunity.  Last year, my job was to "back pour" the meds - literally taking the medication and pouring it along the backs of the animals.

This year, my job included holding the calves' legs with a rope while they got banded.  A few of the little boys took offense, but they all got through it just fine. 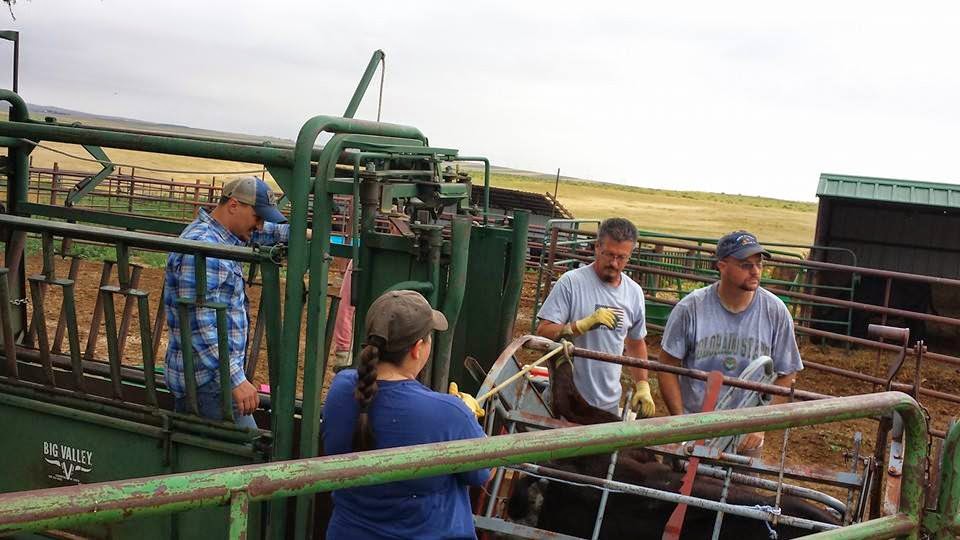 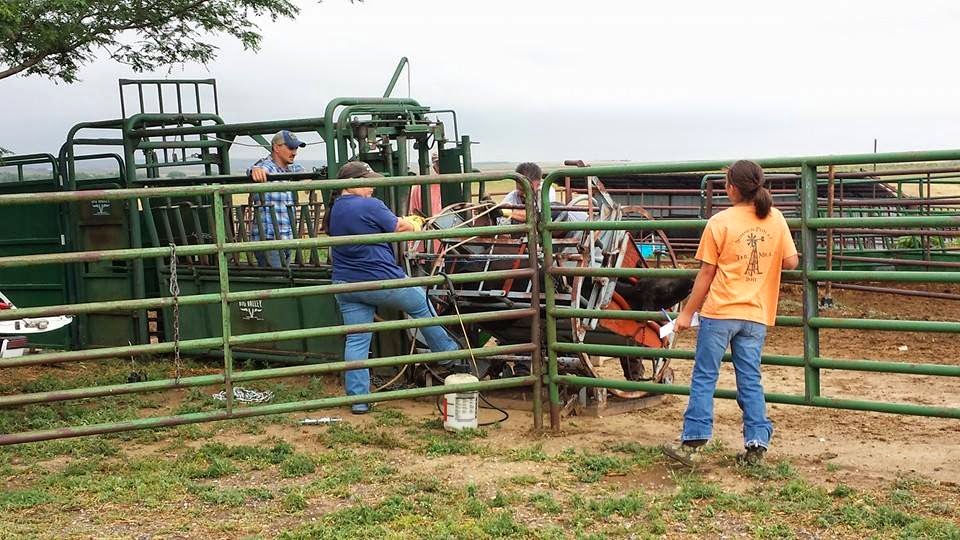 I also got to do the vaccinating this year.  My medical students would cringe to see me shooting the animals.  Human medicine is, in some ways, very different from vet medicine.  No swabbing the area with alcohol and waiting for it to dry, no changing of needles between shots (which means lots of re-capping), no choosing just the right spot.  Nope, it's more, knock the shit (literally) off the skin, jab, inject, re-cap and move on to the next animal. 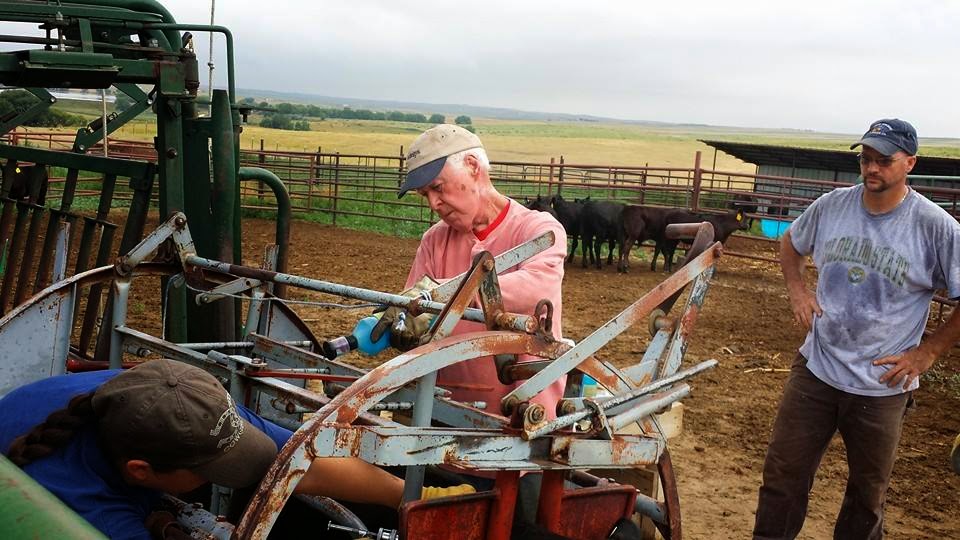 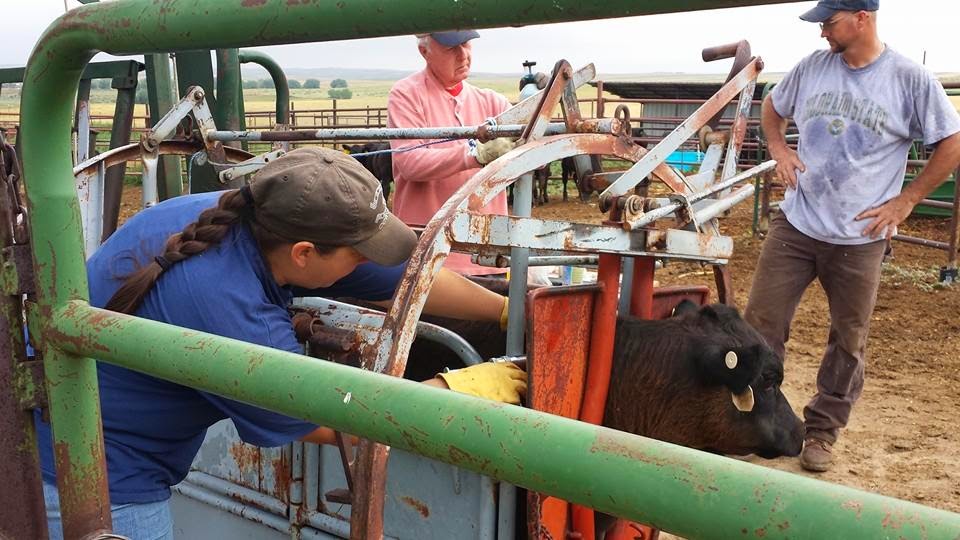 Shooting the calves is much, much easier than shooting the cows.  Believe it or not, the bulls were perfect gentlemen while they got taken care of.  The cows, not so much.

Unfortunately, I didn't get to stay long enough to complete the job, because Jay and I had to go pick up some hay.  There were just a handful of cows left to do when I handed off my job, so I didn't feel as guilty as I would have if I had bailed earlier.

I found a screaming deal on hay ($3/bale), but we had to pick the hay up out of the field.  Jay and I called in our substantial families and met them at the field.

In order to have all available adult hands loading, I threw Deejo's son, The Boy, in Jay's truck to drive while we loaded.  Poor kid.  He had never driven before and was a bit wary.  He's fifteen-ish and should be getting his learner's permit anyway.  He got a quick lesson on which was the gas and brake and how to steer.  I must have been feeling particularly confident in this never-driven-before kid's ability, because I didn't think twice about making T (Junior's son) and Asset (Nebalee's daughter) ride in the cab with him.  Easier to corral all of the kids in one place than try to keep track of them.

With two trucks/crews running, only took us about 25 minutes to load 120 bales.  Not bad - I thought we'd be out there much longer. 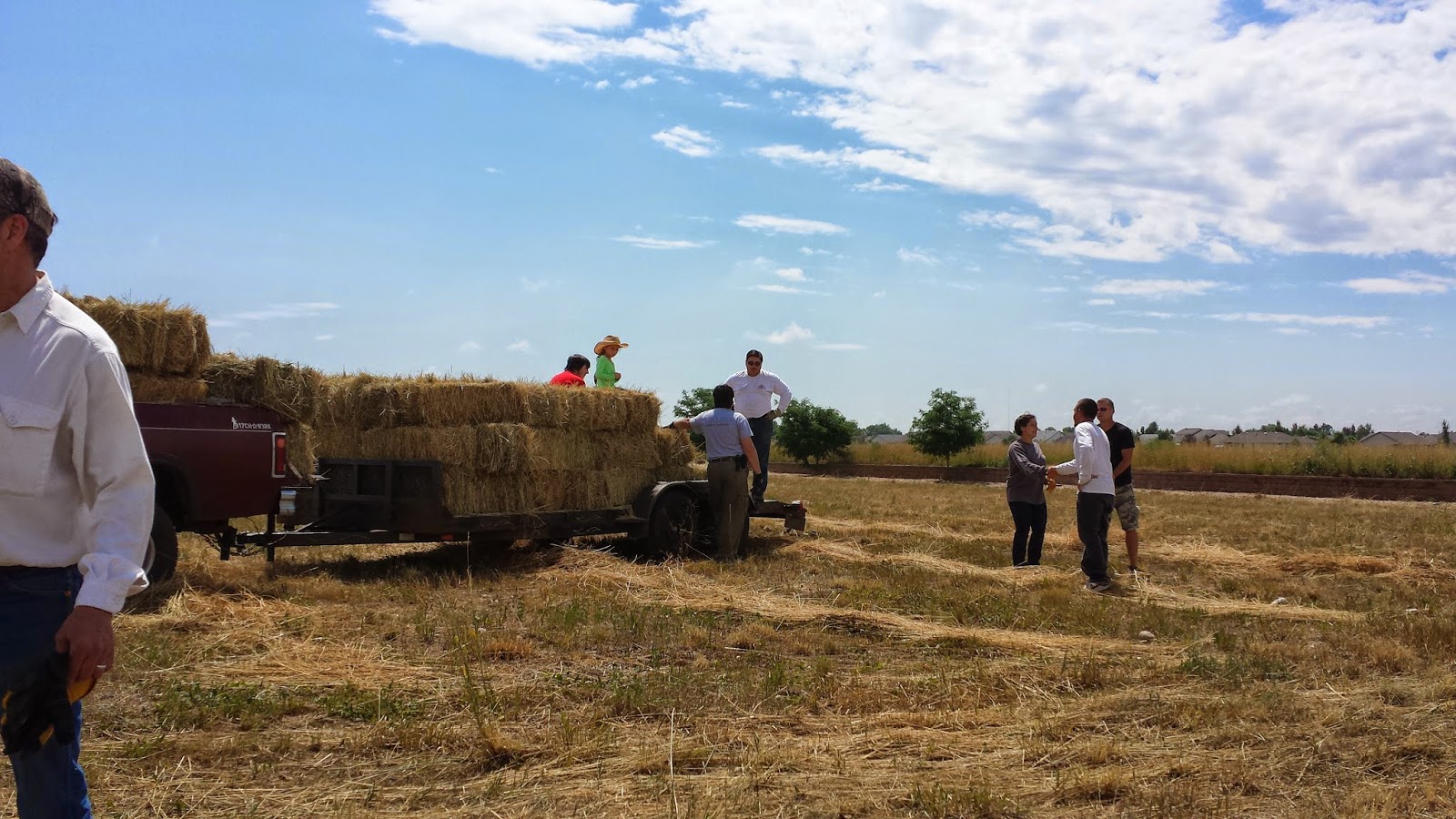 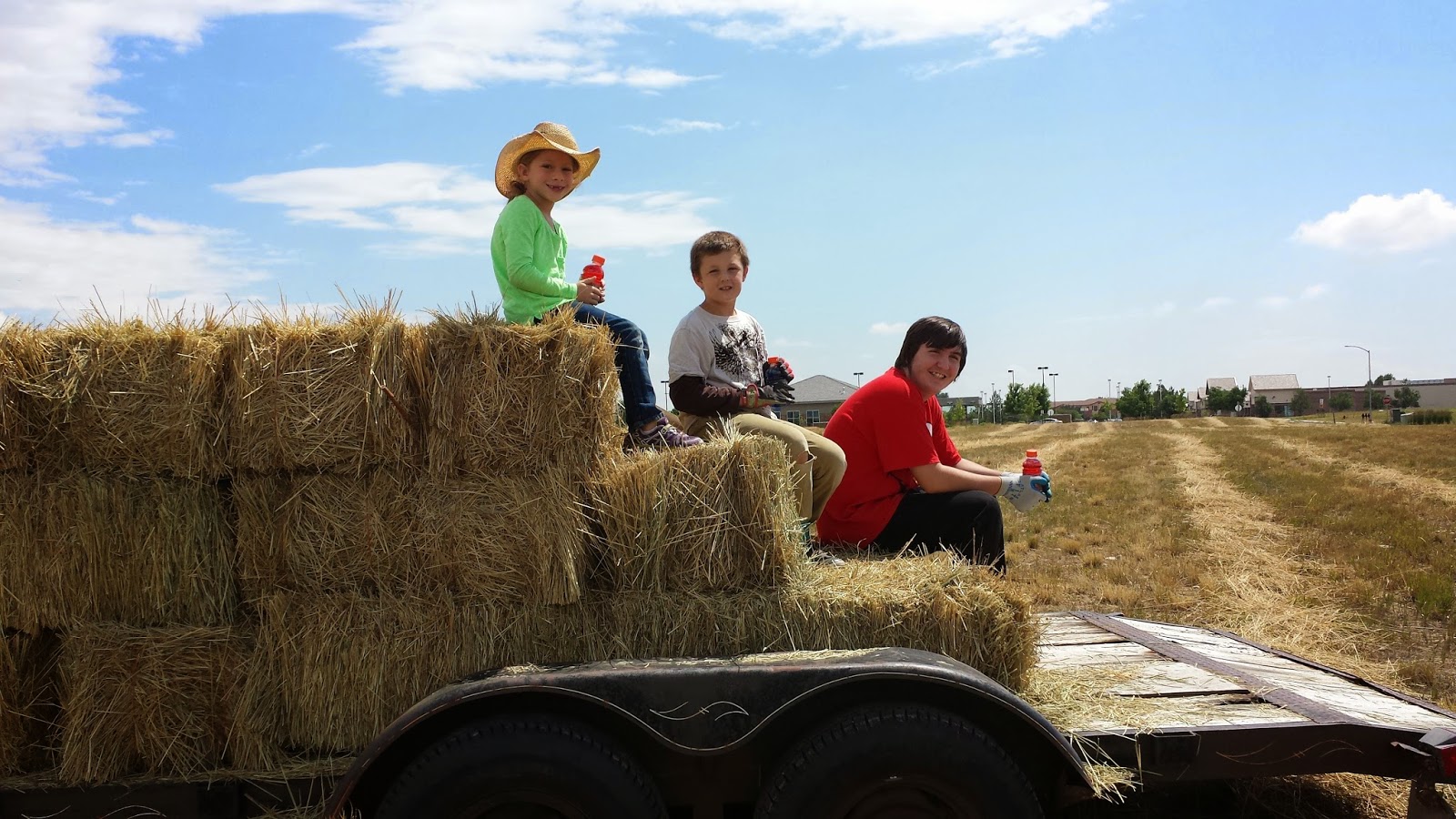 In no time, we were headed back to L.E.'s to unload.  We don't have much storage space, so fifty bales were put up inside the pen and the rest were stacked outside.  I just stepped aside and stayed out of the way while everyone else stacked the hay - too many people in one place makes for quick, but crowded, work. 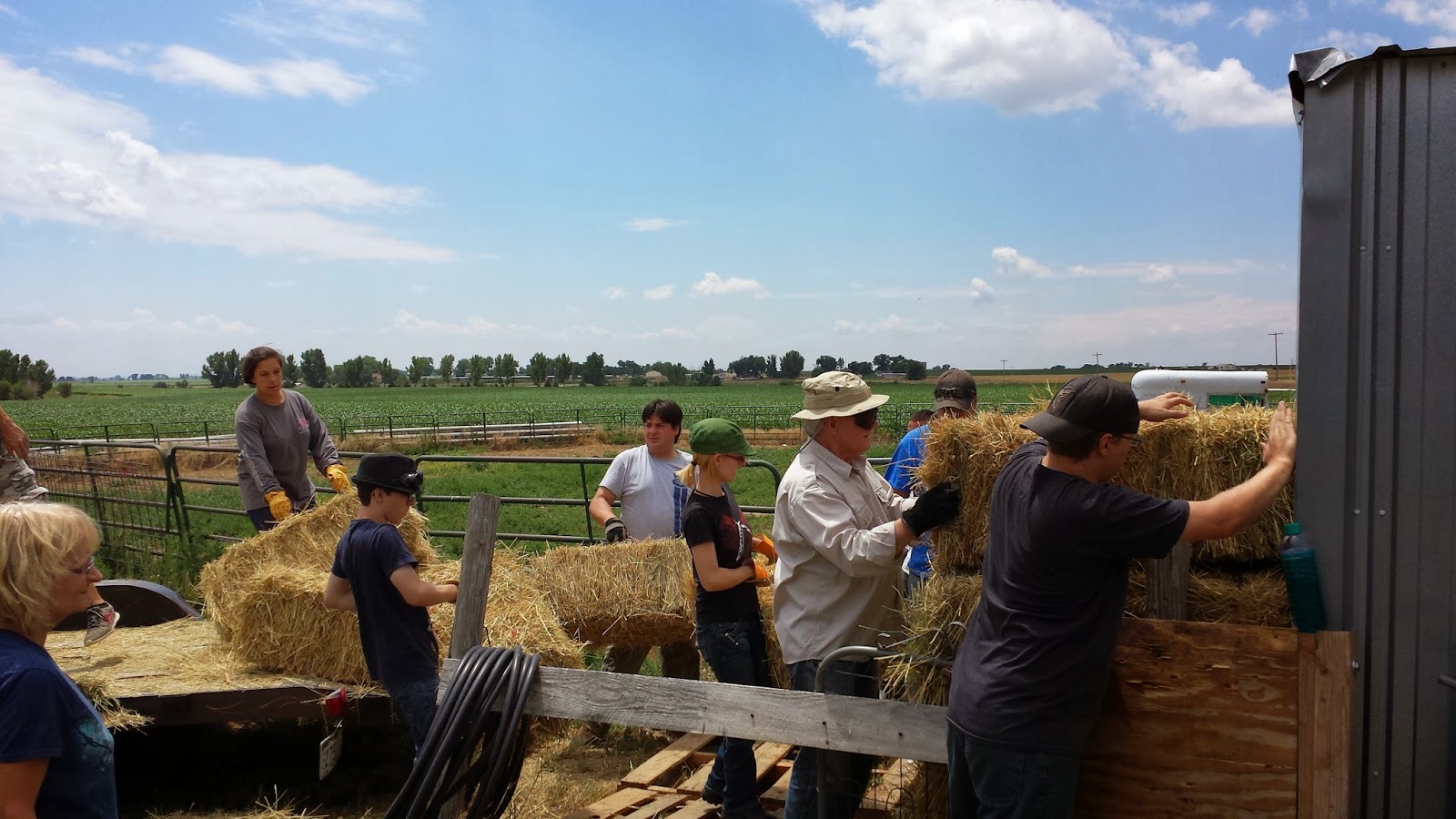 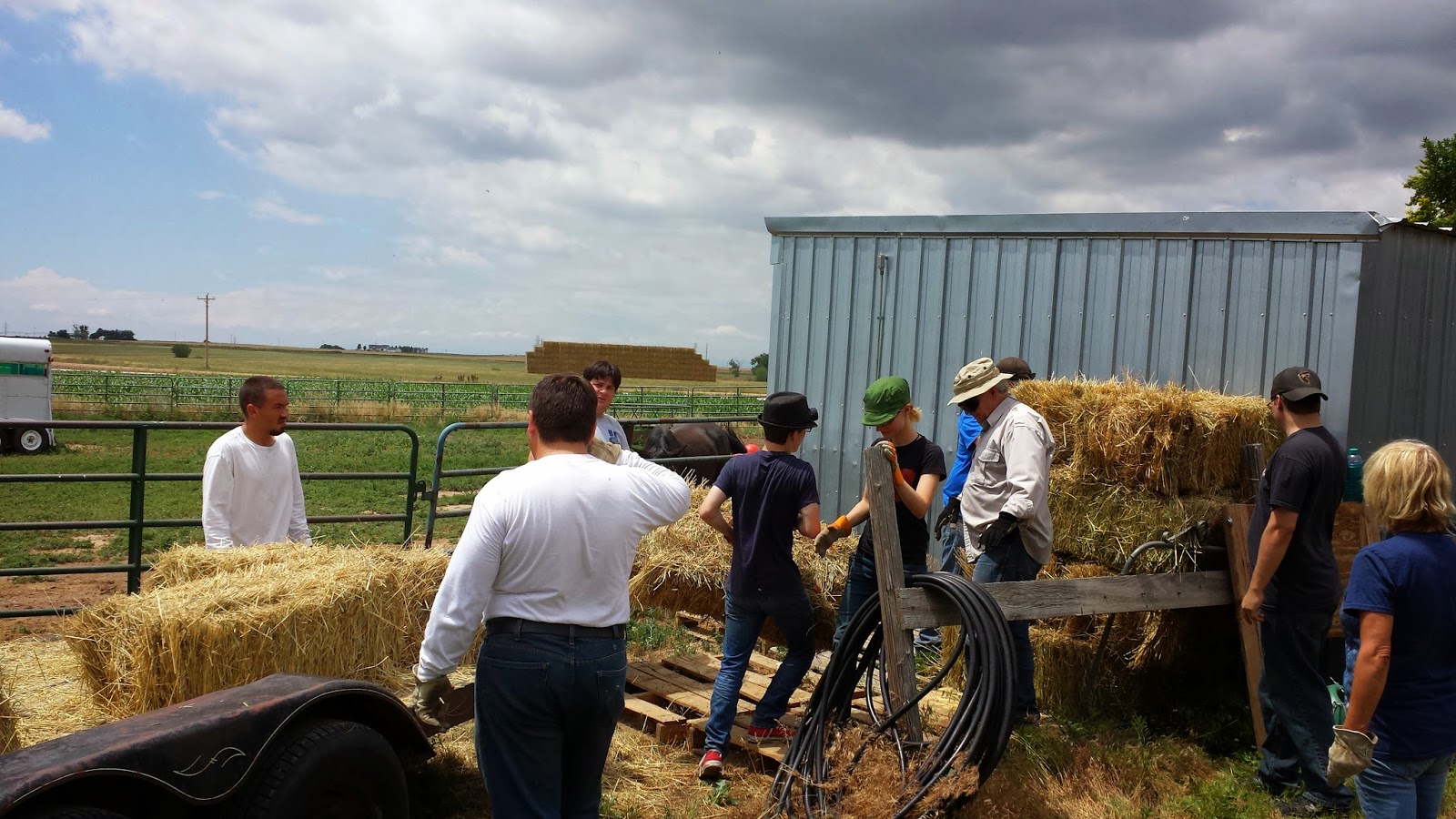 It feels good to have most of the hay laid in for the year.  We've got another fifty bales that we'll pick up next week, and I'll probably buy another fifty in September just to make sure we'll make it until first cut next year.  It hurts the pocketbook right now, but we'll definitely appreciate not having to put out money every month for hay.  My hope is that we won't lose too much to mold, like Mom did last year.  We stacked and tarped with an eye toward air circulation.  If moisture gets into the stack, there should be enough circulation for it to dry out.

Yesterday was busy and physically demanding, but I loved every minute of it.  We have the best family, who were willing to give up a couple of hours in the middle of the day on a Saturday to work in heat and humidity.  It was truly "Just Another Perfect Day".
Posted by GunDiva at 11:42 AM 1 comment: