A Glimpse at the Future - I like what I see

This past weekend was the first time RockCrawlinChef had spent the weekend at my house. Despite being engaged, we still maintain two separate households. Taking on an entire family can be daunting and I'd rather we ease into it as much as possible. Maybe "ease" isn't the right word after this weekend.

I scheduled a Drop-in Crop at the school for staff and students on Saturday, long before I knew it was Rocky's Homecoming, and, being the hostess, I couldn't ditch the crop to help out with the kids. I had asked RCC a few weeks ago if he would be willing to cook the kids' dinner rather than having them go out and he agreed readily. Not only did he cook dinner for Digger, Digger's girlfriend, and his friend, Haak, he took Monster to the skatepark and the mall, helped Ashee-butt with a last-minute dress adjustment and dropped the kids off at the dance. I've never had someone in my life so willing to help out and happy to spend time with the kids. It was good for all of us. In all fairness, my brother Junior was also a huge help; he picked up the kids and drove them all out to Ault to RCC's place for dinner. But Junior is my brother; until now, I always had to rely on my parents or siblings to help shuttle the kids around. It's an entirely new experience to have RCC embrace the role of step-dad so completely.

This weekend wasn't all roses, it had its ups and downs. Any household with three teenagers will have that, but Jay weathered it like a pro, and having him around was a stabilizing influence for me and the kids.

We're not married yet, and won't be for several months, but the kids have already started to refer to him as their step-dad and he proudly refers to them as his step-kids. After this weekend, any doubts I had about how well our "new" family would get along are gone. My biggest fear with merging our two households is not whether or not the kids and RCC will get along, but how well our dogs will get along...but that's a story for another time.
Posted by GunDiva at 11:41 AM No comments:

A couple of years ago, when I was working at the gun shop, one of my regular customers referenced something he had read concerning "sheep and wolves"; the jist being that the majority of the public are sheep who live in denial and are more than willing to be lead to their deaths and there are wolves who are more than willing to eat the sheep so calmly lead to slaughter - the sheepdogs are the stop-gap. I looked everywhere for that article and no matter who I asked, all I got was a blank stare - no one had a clue what I was talking about. I began to think I was crazy (and maybe I am, just a little).

Lynette, our amazing librarian, was looking for some books to add to the library collection and I suggested Gavin de Becker's series of books (The Gift of Fear, Protecting the Gift, and Fear Less), which are some of my all-time favorite books. Protecting the Gift is the book I give all new parents since it's got so many good, common-sense tips for protecting our children. When Lynette was ordering the books she came across a new book, Just 2 Seconds, by de Becker, et al. It was in this book that I finally found the reference to sheep and wolves that I'd been looking for so long ago.

It's called "On Sheep, Wolves, and Sheepdogs" by LTC (RET) Dave Grossman and after reading it, I realized that it is an exact description of the citizens of the U.S. I'm a Sheepdog, and, by God, I'm raising Sheepdogs!

This will be a long post, but I think it's important for everyone to read this article, so bear with me please...

There is no safety for honest men except by believing all possible evil of evil men. - Edmund Burke 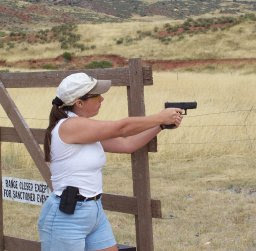 One of my favorite things in the world is Gunpowder Therapy...might have something to do with the nickname "GunDiva". There's nothing quite like the feeling of a controlled explosion in your hand to rid yourself of stress. For a long time, my favorite form of Gunpowder Therapy was the monthly defensive pistol matches at Northern Colorado Rod & Gun Club (http://www.ncrgc.org/). When I turned 32, my family pitched in and bought me a .40 cal Glock and I shot that thing for well over a year before getting a "big boys' gun", a Para-Ordnance LTC 1911 in .45 ACP. The monthly matches were "mine"; my way of blowing off steam and doing something that was just for me. Some women go to the spa for "me" time, I went to the gun range. Unfortunately, over the past year or so, finances dictated that I spend less and less time at the range. I still manage to make it out a couple of times a year to the matches, which makes my time at the range even more sacred.

In April of this year, I did something that surprised me - actually shook me to the c 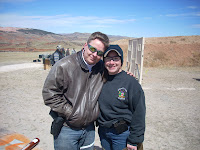 ore - I invited RockCrawlinChef to join me at the match. We'd only just met face-to-face two weeks before the match but hit it off well and before I knew it, it just popped out, "you should come shoot the match with me." WTF? I never intended to share "my" matches with anyone. They were mine - those six hours on the range with my shooting buddies were sacred and I had invited someone I had just met. I must have lost my mind. What shook me even more is that I loved it! I loved sharing something that was just mine with RCC...it should have been a sign.
I'm constantly surprised by the things that excite me and make me all sentimental-like (welcome to the softer side of the GunDiva). Things like getting ready for the match on Saturday night. Who would have thought that the mere act of cleaning our guns together would mean so much? It's silly, I know, but no one else has really been interested in my shooting; I was always the "expert" if I took anyone out, so I was the one cleaning the guns and getting everything ready. Saturday just illustrated to me what a great team we make and how much I do enjoy sharing my sacred matches with RCC.
The match on Sunday wasn't my best, and in all honesty, I haven't been shooting well in a while - it's a very perishable skill and without constant practice it's pretty easy to lose the edge. However, getting to shoot with RCC and spend the day outside blowing shit up (except those damn bowling pins) was so relaxing. By the time we were done with the match I was sunburned but happy. Those controlled explosions really do bleed stress and having someone to share it with - pure bliss.

Here's RCC shooting one of the stages. The instructions were to start with our toes and nose touching the wall (don't know what we did to deserve time-out) when the buzzer sounded we were to engage the targets on either side of the wall (two up close and two far away) without hitting the hostage, perform a mandatory reload with retention (don't drop the magazine), move to the door and shoot the bad guys on the way (no stopping), open the door and "slice the pie" (shoot the bad guys in the order you see them appear). All of this is timed and scored, so not only are you racing against the clock, but you must be accurate as well.
Posted by GunDiva at 11:52 PM 1 comment:

My dear friend and fellow Gun Diva, Tara Janzen, just released her 9th book in the Steele Street (CRAZY/LOOSE) series, which debuted #33 on the New York Times' Best Seller List! Yay, Tara! Check out her website, http://www.tarajanzen.com/, for more on her books and the kick-ass shotgun she built (Skeeter's Shotgun). 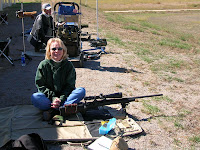 Tara and I met a couple of years ago (about 6 books ago, I think) while I was helping teach a firearms class. We immediately hit it off and I absolutely adore her. Besides being an amazing human being, she's my favorite shooting buddy (sorry, RockCrawlinChef). Tara's one of the hardest working people I know and it's about time that she made the List! Honestly, she's one of the best authors around - she's got a way with words that I envy - and I'm so proud of her for this well-deserved honor.
Congratulations Tara - the Heathi and I love you!
Posted by GunDiva at 10:30 PM No comments: