Once Upon A Time, some people pissed GunDiva off ...

At the beginning of the year, I posted about the 28 day FAST Metabolism Diet.  Y'all know I *hate* numbers, right?  So I'm still refusing to engage with them.  After our first round with the diet and the numbers (I did lose some inches, BTW), I decided I still hated the numbers and if I was going to repeat the 28 days I was going to do it because it is good for me, not because of some numbers on a scale.

People at work have noticed my drastic change in diet - I haven't tried to hide it - and I'm a lot better about not joining in on the impromptu "let's go to lunch" stuff.

One of my well-meaning, but probably orthorexic, colleagues told me a few weeks ago, "nothing tastes as good as skinny feels."  I call bullshit.  I've been skinny.  You know what it feels like?  Guilt.  It feels like fucking guilt.  Every missed work out, every bite of "forbidden" food equals Guilt.  That is no way to live a life.

I've been skinny and I've been fat, and I'll tell you what: I'm much happier living my life now than when I was skinny.  Did I look better on the outside?  Yep.  Did I like the way I looked in pictures?  Yep.  Was it worth it?  Even just a couple of years ago when I was working out like a beast with The Little Bastard?  Maybe, at the time I thought it was worth it.  Now?  No way.

Just last week, as I was shoveling down my salad, I mentioned that I was being really good with my diet because I had a cheat day planned.  A different co-worker piped up and said, "how on earth to plan on losing any weight if you schedule cheat days?".

Um, excuse me, but just because I'm fat, do NOT assume that I'm trying to lose weight.  I'm eating cleaner because it makes me feel better.  I could not give a flying fuck what the scale says.  I lived my life by the scale for far too long and I'm not going to chain myself to it any longer.

And yet another co-worker, when he noticed me eating my salad and drinking my ONE Coke for the day, told me he'd rather see me eating the greasy cheeseburger and fries that my other co-workers were eating instead of drinking that "poison".  The one thing I refuse to give up, and I've said it for years, is my Coke.  It's not going to happen so people need to back the fuck off about it.  I have very few vices, other than my foul mouth and my love for Coke.  I don't smoke, rarely drink, and don't do drugs. Look, dude, I know you're a personal trainer, but you're not *my* personal trainer and unless I'm getting drunk or shooting up at work, what I put into my body is none of your business.

What I would really love is for the people at work to stop assuming I'm eating healthier to lose weight.  And I really wish they'd keep their damned opinions and comments to themselves.  God forbid I do something like work out - I can only imagine the "help" I'd get then.  I do plan on being more active as the weather continues to warm up, though I won't call it "working out".  My whole goal is to be healthy enough to do what I want to do.  If I want to go for a hike, by God I'm going to go for a hike.  If I want to take Skeeter for a walk, I'm going to take Skeeter for a walk.  But I don't need my armchair quarterback co-workers being "helpful".  I need them to shut the fuck up and mind their own business.

Speed Racer and Gizmo Go to the Vet

Now that we know that the kitten formerly known as Abby is actually a boy (oops), we decided it was time for him to get a little snippy-snippy.  Gizmo, my son's cat, has also moved back in with use and that cat is always in heat, so I made an appointment for both of them to be "altered".  I guess that means we now have two "it" cats.

Speed Racer hates cardboard boxes.  He's the only cat I know that will have nothing to do with them.  I'm going to anthropomorphize a little bit and say it's because he was abandoned in a cardboard box - he does not associate them with anything good.  Surgery day, Jay and I did the ol' scruff and stuff and managed to get the cats into cardboard carriers.

Now, Gizmo hates the car and yowls the whole time she's in it, so while Speed Racer was plotting his way out of the cardboard box, she was serenading us.  She did do us a solid when he started crying and talked him down, so the last few minutes of the drive were pretty quiet and calm.

We dropped them off along with a million other people.  Almost all of the cats we saw getting dropped off were black and white cats, too. I mentioned to Jay that we'd have to double check to make sure we came home with the right black and white cats.

At the end of the day, we went back to pick them up (we got the right cats) and we were warned that they'd be drugged up for the next 24 hours and that they would probably be seeing pink elephants and not have a clue who we were.  Just let them be and they'll be fine, we were assured.  As a side-note, the tech told us that Speed Racer was trying his best to eat his way out of his carrier.  There were only a couple of toothmarks, so I thought we'd be okay.

Forgive me, I should have taken video so you can share in the all-encompassing anger Speed Racer exhibited.  Introducing Speed Racer as Jack Torrence in The Shining. 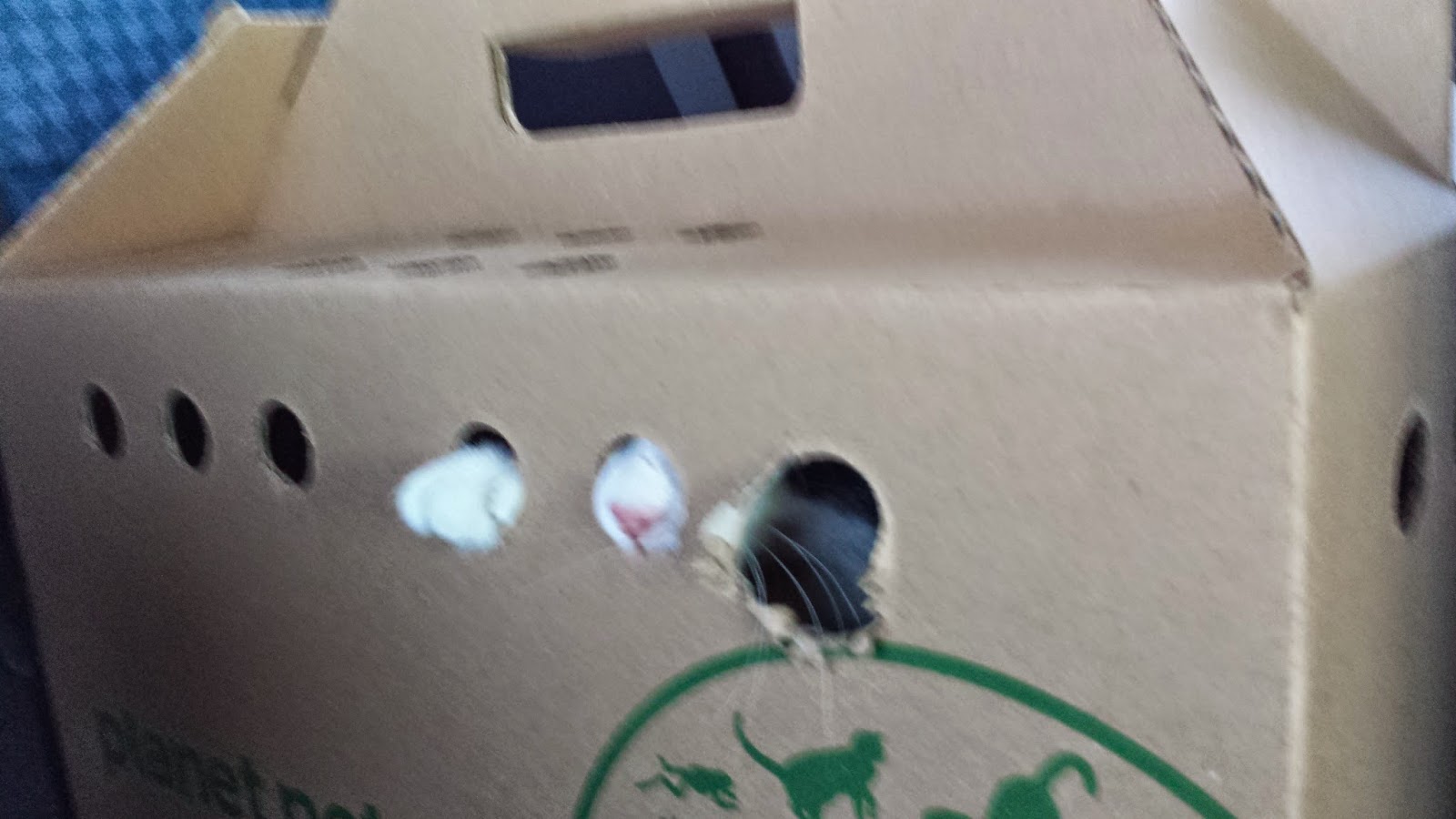 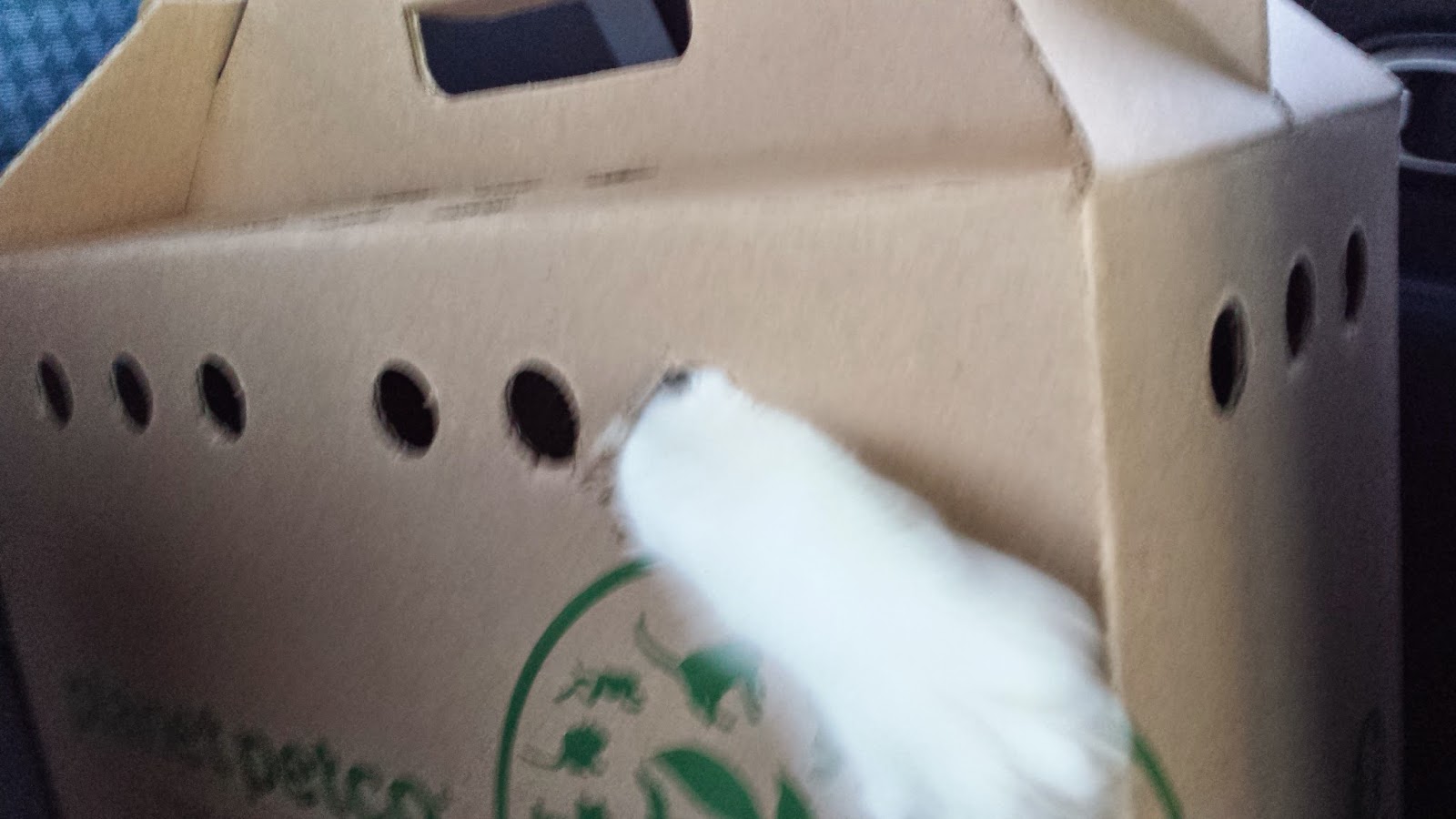 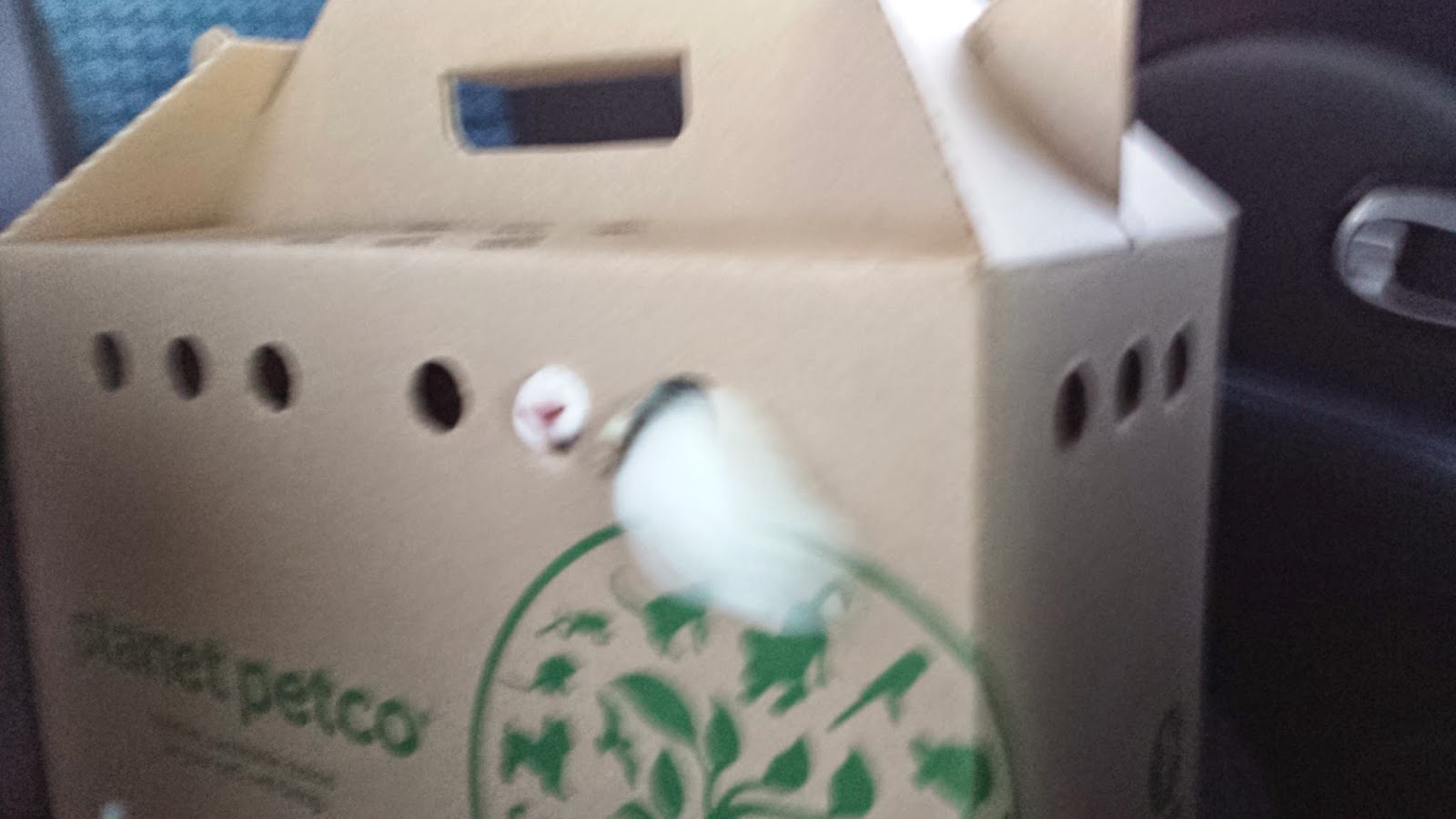 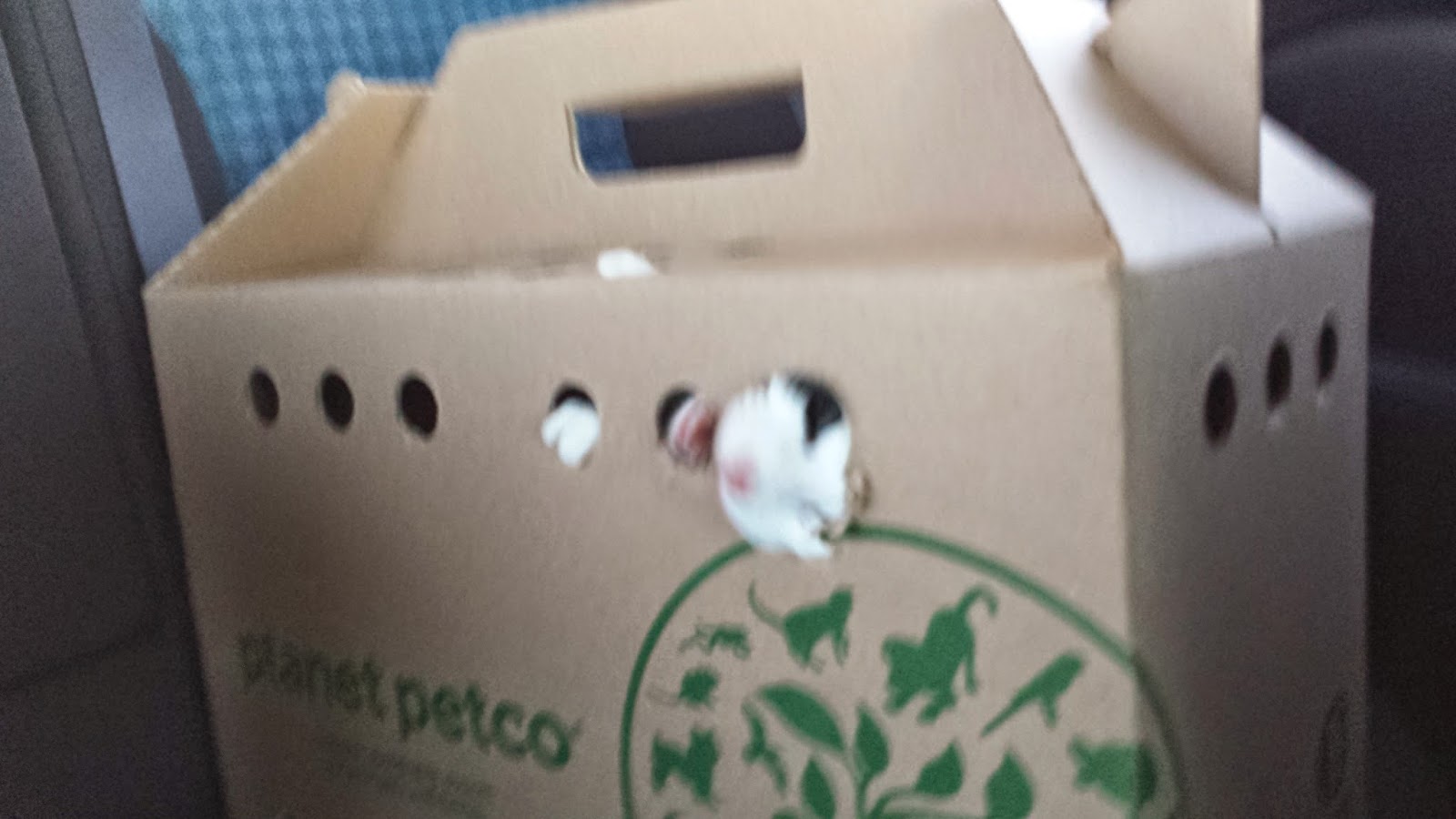 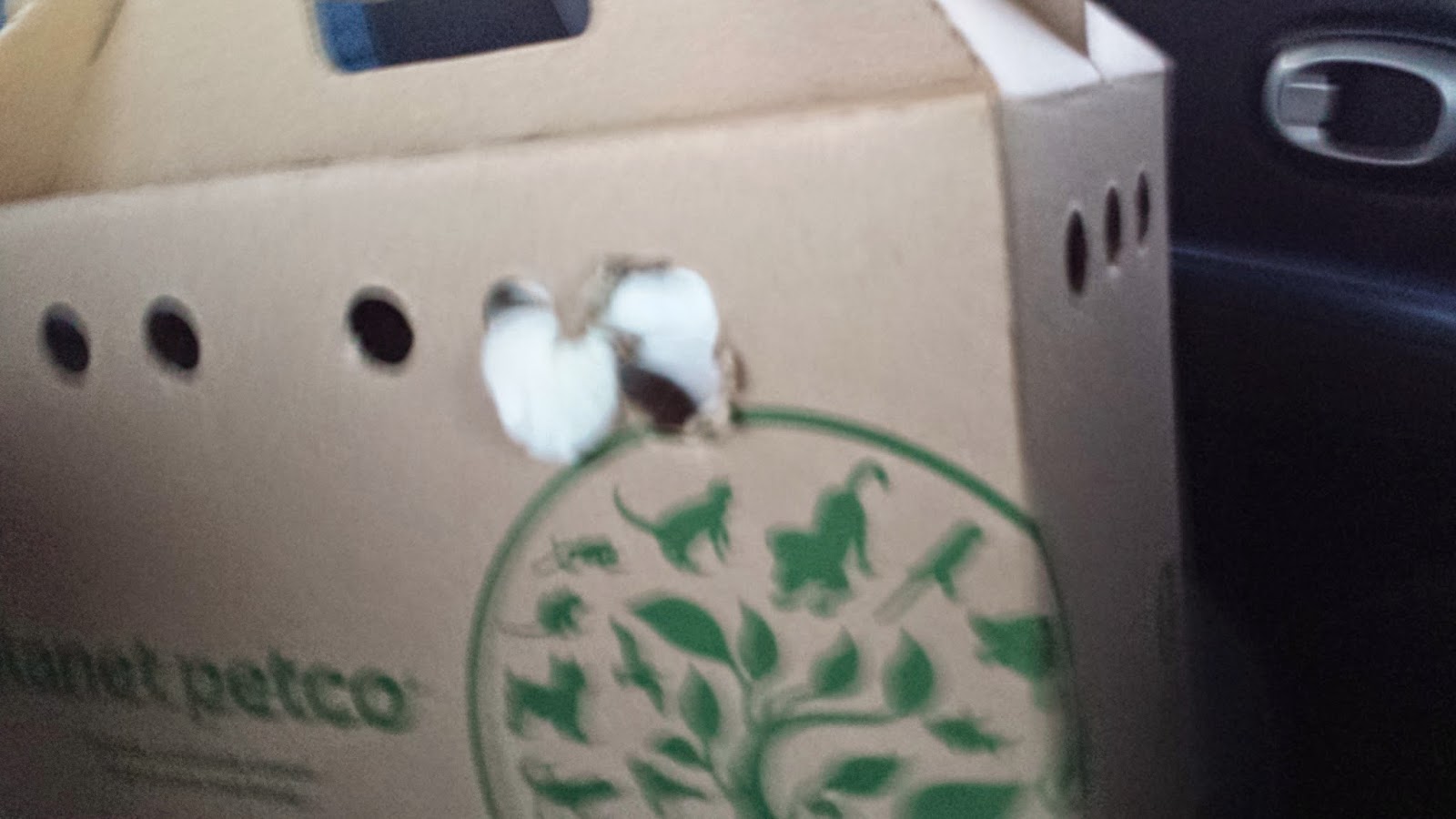 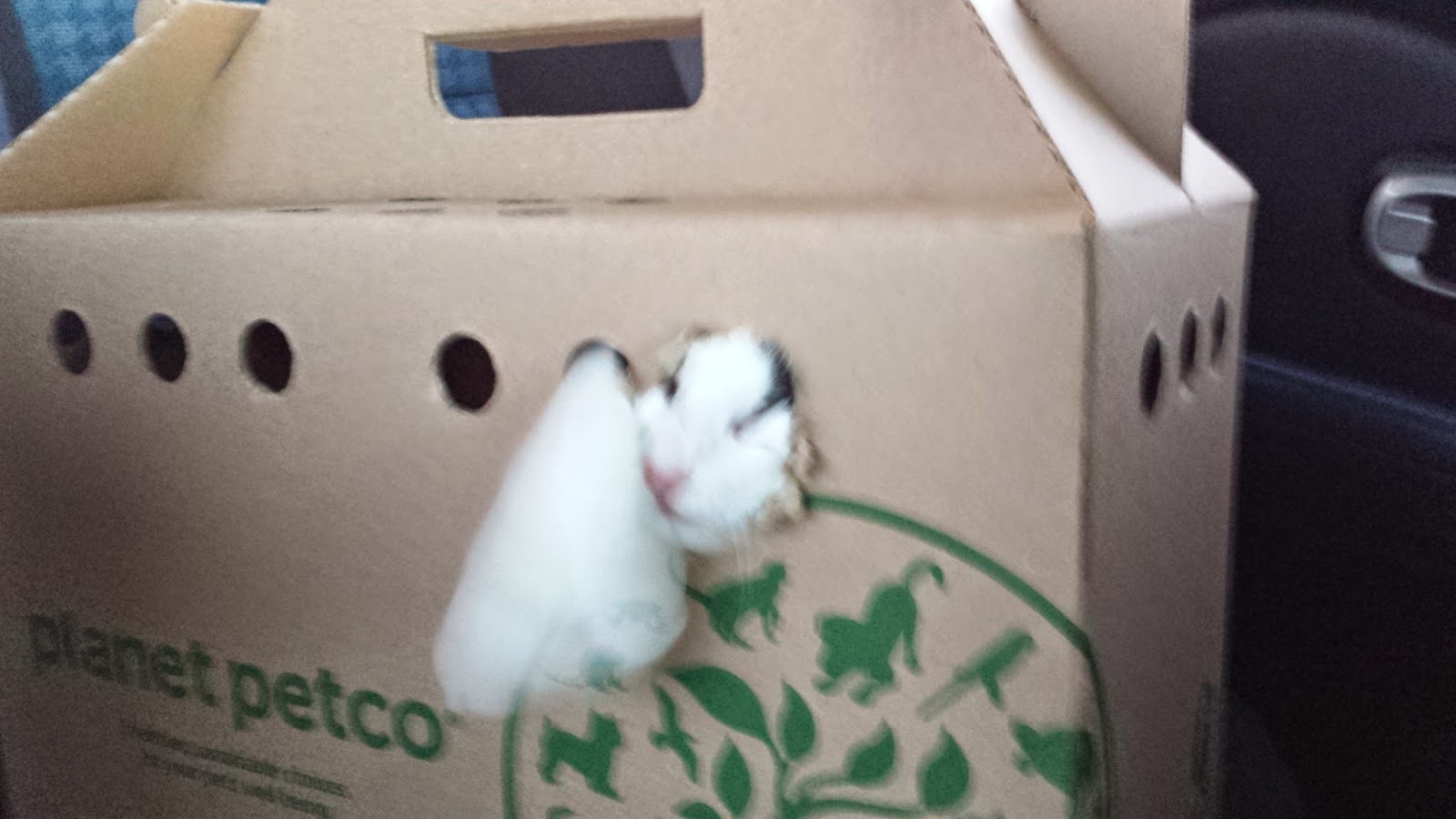 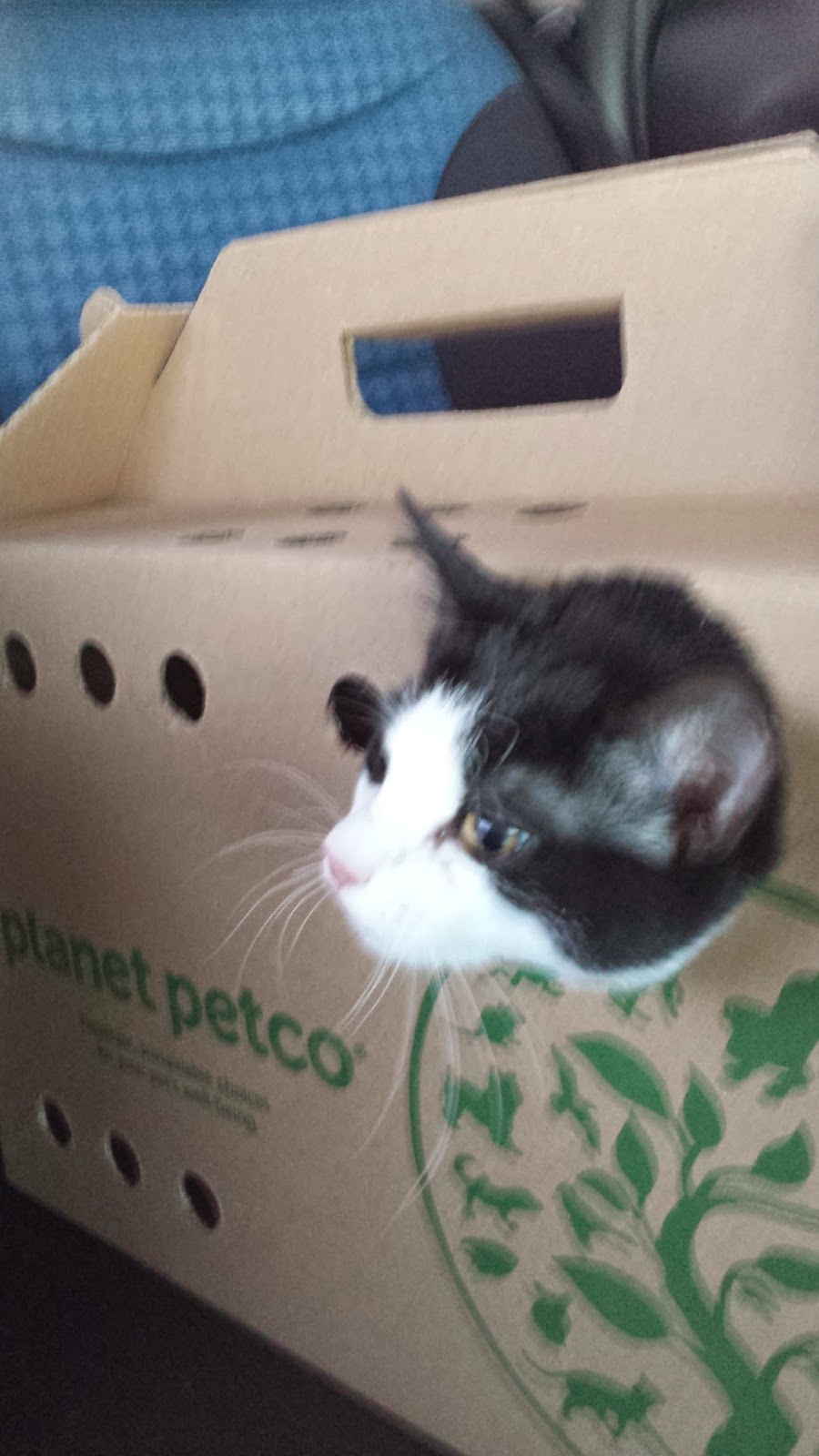 Jay was driving and I was giving a running commentary while I was trying to simultaneously take picture and push the little bastard's head back in the box.  I lost, as you can see.  I finally took a sweatshirt and tied it tightly around the box in hopes that the dark would calm him down (and it gave me a level of protection as I was trying to keep him in the box).  The sweatshirt worked for about a half a second before he decided he was going to keep eating his way out of the box.  Suddenly, it went from The Shining to Alien, when the alien is trying to claw his way out of the guy's abdomen.

I shoved his head back in the box through the sweatshirt and kept my hand flat against the hole so he couldn't poke it back out.  He changed tactics and started growling and pulling the sweatshirt into the box so he could kill it.  I was fairly concerned at that point and relieved that we were less than ten minutes from home.  I did NOT want that demon cat getting loose in the car.

Surprisingly, Gizmo was quiet the whole way home.  She hunkered down in her carrier and didn't say a word, thank goodness.

The vet tech had told us to just open the carriers and let them come out in their own time.  I have to admit, I was worried about letting the demon cat out of the box, so I let Jay do it. 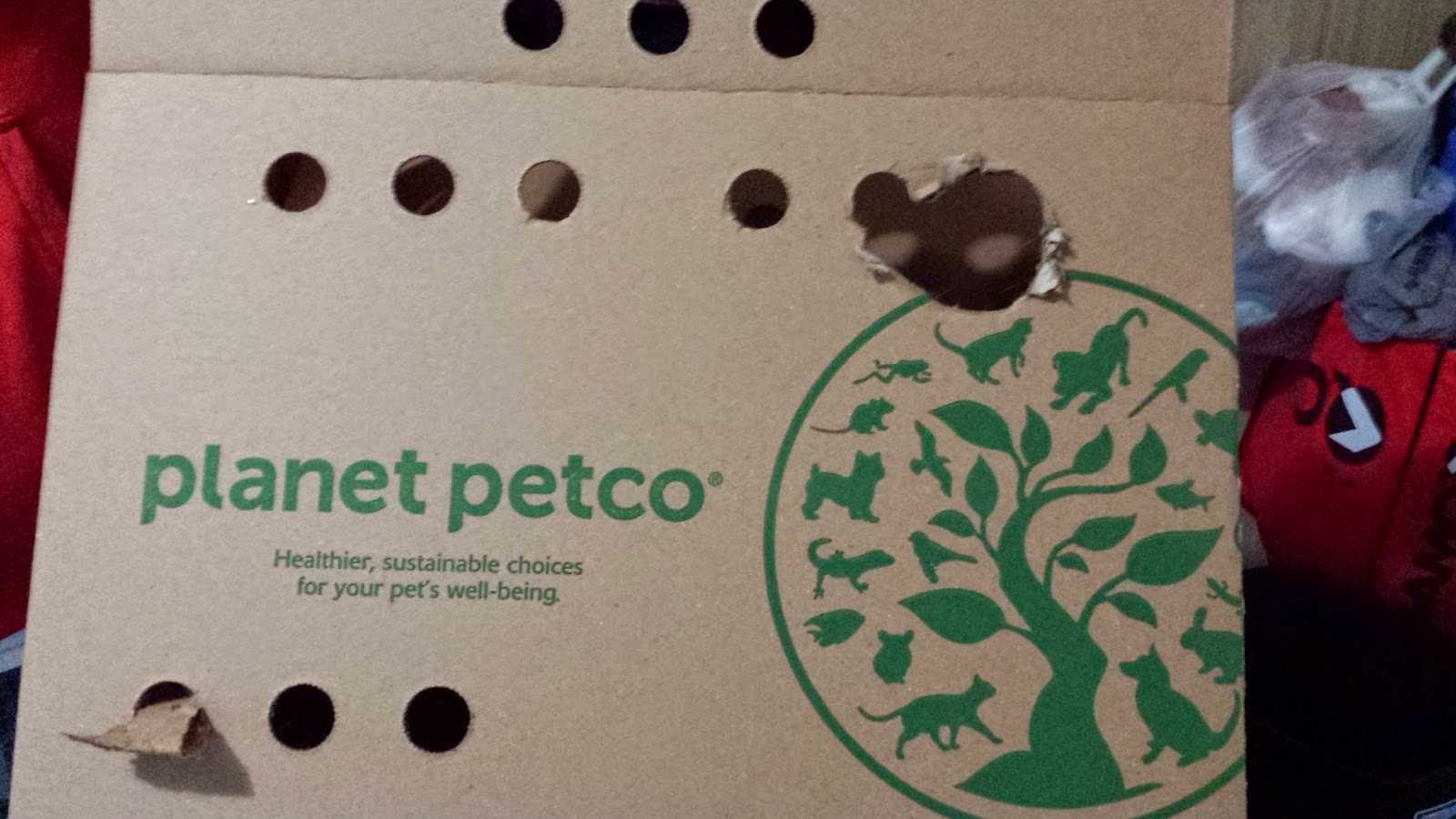 He was out of the box like a shot, so I couldn't get a picture of him leaving, but this is what he did to the box.  Next time he goes to the vet, he's getting a metal carrier.  Speed Racer ran around the house checking to make sure everything was still here for hours.  He really earned his name for the twelve hours after his surgery.  Stupid cat.

Gizmo was a bit slower deciding to leave her box, until Speed Racer convinced her to come out.  I think she thought we were going to move her to a new place again.  Once she realized she was back home, she found the oil heater and curled up there for the next 24 hours. 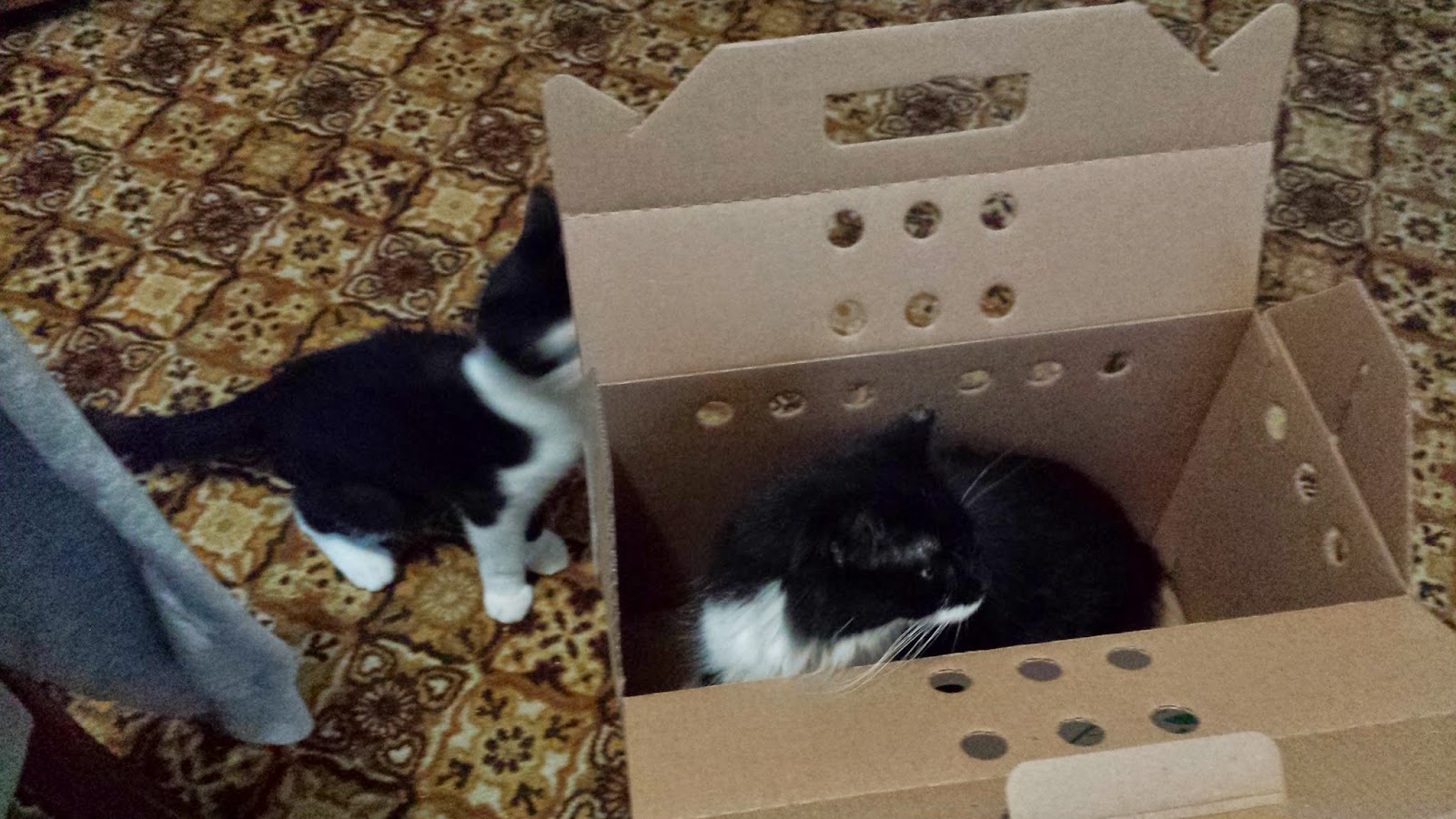 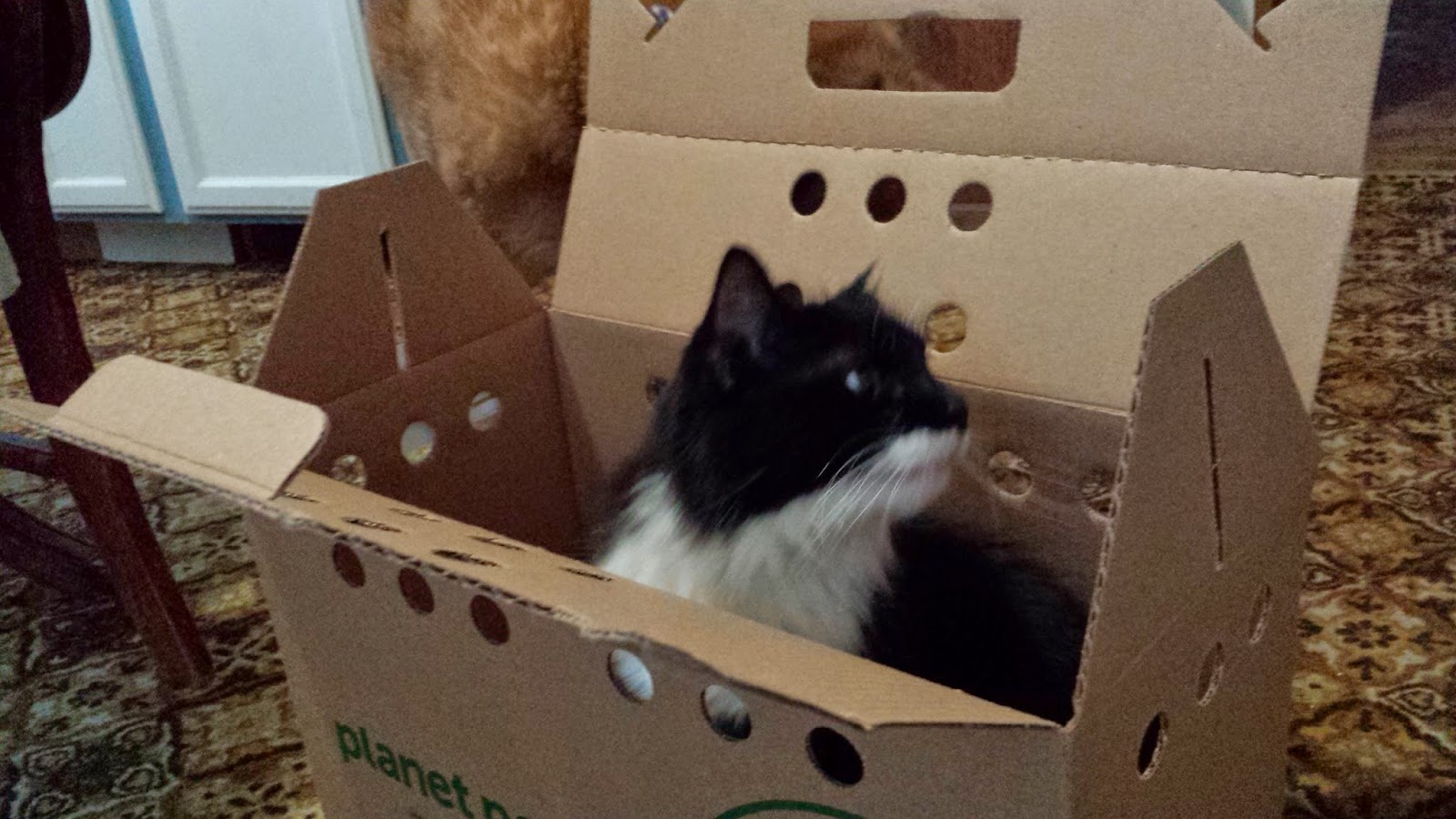 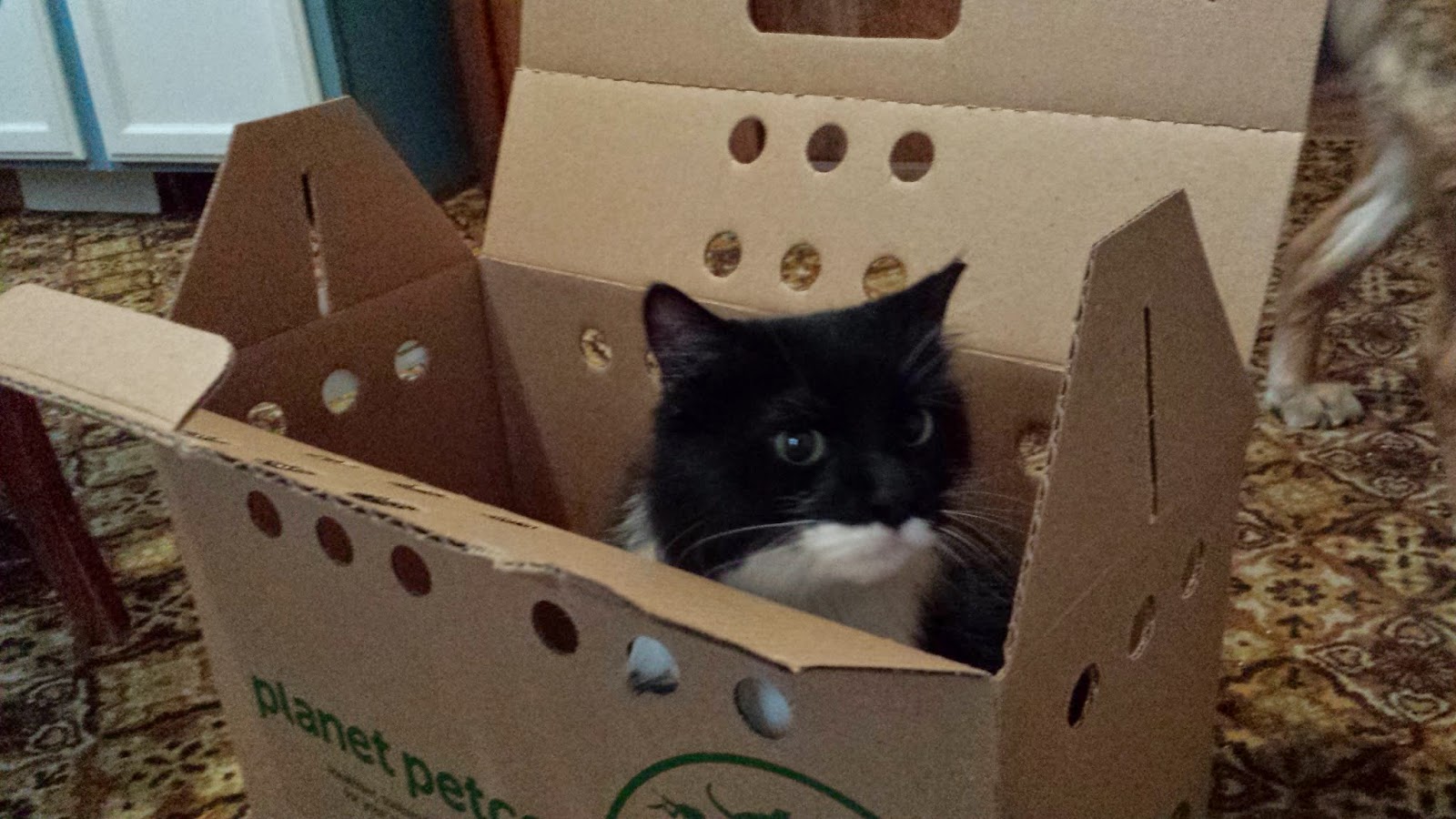