I managed to get out of the house long before the sun even thought of making an appearance the morning we were to depart for Wisconsin. A quick stop to pick up a friend of mine, and we were off to the airport.

After about a half a day of travel, we arrived at our destination: Northeast Wisconsin Technical College in Green Bay, Wisconsin. My first impression as we stepped out of the airport was that Green Bay was hot and wet. My Colorado body is not used to drinking its air.

We had a couple of hours of down time before the afternoon "welcome" activities began, so we curled up in a couple of chairs in the lobby and took a nap while we waited for our room to be made available. When gearing up for the WPA, it's important to get rest when you can, because once the festivities start it's balls to the wall.

The afternoon welcome session started off with Show and Tell. My friend and I braved the wall of humidity to go see the Sheriff's cool toys. 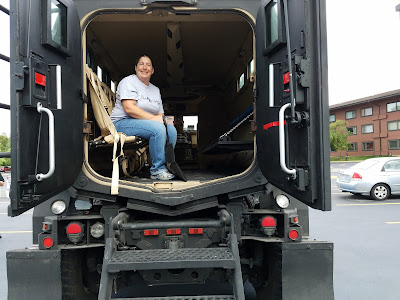 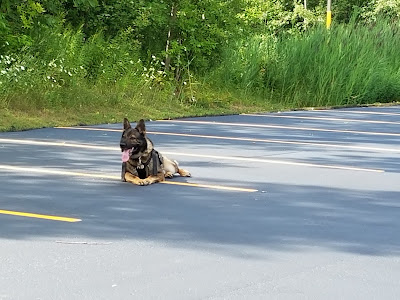 I don't know how the LEOs there work in all that gear (even just their every day uniform) with the heat and humidity. After an hour, I was done and I was only in jeans and a t-shirt.

I learned a couple of things from the evening announcements:
After evening announcements, there was a session on drones. Drones are more correctly called UAVs (Unmanned Aerial Vehicles) or sUAS (small Unmanned Aerial Systems) and are overseen by the FAA. Capt. Bill Bongle (ret.), talked to us about some of the FAA legalities, such as setting the max altitude at 400 feet. We also learned from an old case (Causby vs U.S. 1946) that 83 feet is the altitude that one can reasonably expect privacy.

There is a current case to keep an eye on, Boggs vs. Meredith, that is seeking to clarify aerial trespass. The issue is that Meredith shot down a UAV piloted by Boggs, which is a violation of a statute that makes it a felony to shoot down or damage an aircraft. Meredith argues that the drone flying over his property is a violation of privacy.

Capt. Bongle was kind enough to bring a variety of UAVs for us to see.

I fell in love with the itty bitty flying machine, and think I need one. The bigger ones are cool, but this miniaturized one is just adorable. 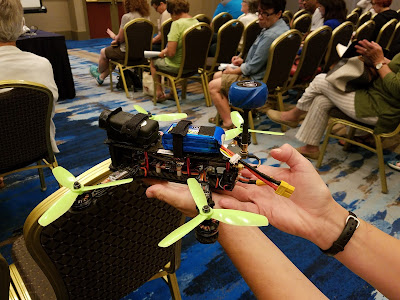 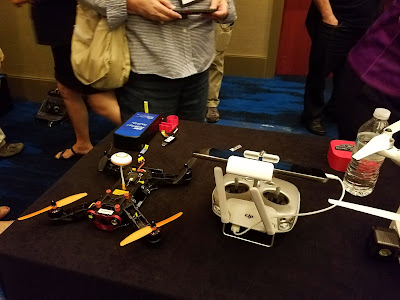 By the time the drone talk wrapped up, I was exhausted. It had been a very long day and we still had two full days of fun to go.
Posted by GunDiva at 4:11 PM 1 comment:

When choosing a new book to read, do you read the reviews? Amazon seems to have the most prolific reviews and a lot of authors depend on them.

As a reader, which type of review do you prefer?

One that summarizes the entire book? 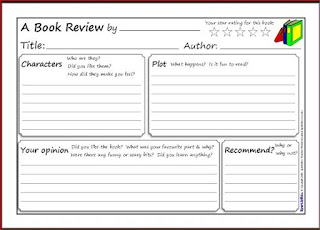 Or one that is more along the lines of "I liked it, and here's why"? 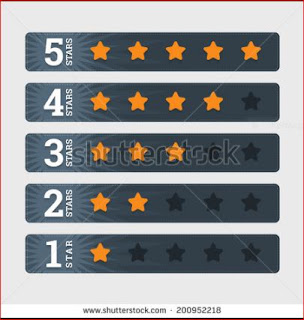 I know what my preference is, which is reflected in the reviews I've left. I do try to leave a review for 90% of the books I read - either on Goodreads or Amazon (usually both) - as an author I know how important they are.

I am interested - which type of review do you prefer and why?
Posted by GunDiva at 10:46 AM 7 comments:

Only a few days before I head off to WPA! This year, I've got a friend and fellow author joining me. I'm unbelievably excited to get to share this event with her and I think she'll have a great experience.

WPA has been described as "Disneyland for writers" and that's about as accurate a description as any. We'll spend almost three days absorbing everything we can from experts in: bioterrorism; law enforcement; fire; EMS; forensic psychology; and crime lab/processing.