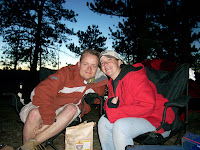 Who knew that one year ago today when I threw a major temper tantrum that it would change my life?
On February 16, 2008 I was lonely and cranky and cranky about being lonely, so I tucked the Heathi into bed and curled up with my computer to give Cupid.com another try. I was just one more bad profile away from calling quits, swearing off men, and becoming a crazy horse lady. I looked through all of the "new" profiles Cupid had to offer and my foul mood became even more foul; I was rejecting one after another for silly things like poor spelling, grammar, punctuation and pure lechery. I was considering closing up my computer and throwing it through the window, but thought I'd just check another page or two before I completely swore off men. I promised myself I'd send out five "eye contacts" before I gave up, but was having a hard time finding anyone that I would even consider sending one to.
And then popped up RockCrawlinChef. I read his profile. OK, the man can spell, put together a sentence and punctuate. There may have been a typo or two, but I honestly can't remember. So here I was, absolutely thrilled to find a profile of a human male, not a prehistoric male, and he loved to travel.
And shoot.
And read.
What the heck? Did someone make this guy up and why was he still on Cupid? What the hell, off went the eye contact...
RockCrawlinChef 02/16/2008 We might make a great match!
I went through a couple more profiles and sent some generic hey-how-are-ya eye contacts, but couldn't get RockCrawlinChef out of my mind.
Well, there must have been something there since the very next day I received a message from him:
I received your eye contact and am interested in getting to know you better. If it makes it easier you can contact me through my email. So, obviously you are into firearms, I have a couple handguns myself and a 6mm deer rifle I received from my grandfather before he passed away. I just realized I really need to get out more and target practice. I have never done any competitive shooting, but that definitely sounds like fun. Where do you compete at? Is it all types of firearms? I love to travel as well, and would agree with you that Italy is beautiful, I went there in 2006 and visited Venice, Florence, Pisa and Rome. Didn't get a chance to make it over to the Cinque Terre, but will next time I go. I have also been to the Netherlands, Germany and Austria in recent years. My plans for my next vacation will be somewhere more tropical in nature, maybe the Pacific coast of Mexico or South America, not sure yet. Well, as I have said I would like to hear from you, and until then, ciao! RCC
From that day on we communicated via email almost daily and finally agreed to meet on March 22, 2008. The rest, as they say, is history.
I never in a million years would have believed that one temper tantrum would change my entire life...and it has, for the better. Had I not decided to give Cupid just one more try before throwing in the towel, I may have missed out on the true love of my life; the soul-mate I never really believed existed until he appeared on Cupid.com.
Posted by GunDiva at 1:46 PM 3 comments: 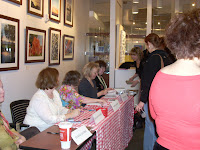 On Saturday I was lucky enough to get to spend the afternoon at the coolest event ever! The Louisville Public Library sponsored a gathering with Colorado authors that was open to the public. I found out about the event through my friend, Tara Janzen, who was one of the authors, but I really didn't know what to expect.

The woman who coordinated the event did a marvelous job - rather than the "panel" of authors I had envisioned, she had the authors present to small groups for ten minutes or so, and then the groups rotated. It was cozy, unintimidating, and very informational. Each author read a short excerpt from one of her books then answered questions from the guests. Guest could ask pretty much anything they wanted about writing as a career, how each writer got started, whether they plot or write by the seat of their pants...

The authors were very supportive and encouraging for those of us in the groups who want to be writers when we grow up. I came away from the event completely energized and ready to tackle my book project AGAIN!
Posted by GunDiva at 1:45 PM No comments:

Sunday, January 26, was a bittersweet day. One of our own Pajama Posse members, Kai (aka Hedgie Handler), gets to follow one of her life-long dreams and go to work for Raytheon in Antarctica for eight months. Why anyone would want to winter over at McMurdo is beyond me, but the entire time I've known her, it's been her dream. It's terribly sad to see her go, but thrilling at the same time because what an adventurous spirit she's got - it takes some big ole hairy cajones to spend eight months in below-freezing temperatures in the dark. I know it's something I'd never be able to do. To me it's THE SHINING waiting to happen, just thinking about it I can hear "redrum, redrum" in my mind. Probably best that I don't even consider working in Antarctica.

RockCrawlinChef cooked our farewell feast, beef tips in pinot noir sauce with root veggies and creamy goat cheese polenta. It went over so well that there wasn't any left - and he made enough to feed a small army! We spent the evening with good friends and good food - I can't think of a better send off for an amazing person even though the Pajama Posse will miss her until her return in October. Coming home to Colorado in the fall/winter will be like summer for her after living at the end of the earth for so long.

Kai's promised to keep us all up-to-date on her frigid adventure via her blog, Hedgie Adventures (http://hedgieadventures.blogspot.com/). She's only been gone a couple of days and hasn't even gotten to the ice and I already want to know what's going on!

Be careful Kai, we'll miss you and see you in just a few months.
Posted by GunDiva at 10:48 AM No comments: