We had Thanksgiving dinner up at the Lodge and for the first time in several years, we had almost every body there.  We were only short one person.  Monster decided to spend Thanksgiving with his other grandmother (again).

It sort of sucked that he wasn't there, but on the other hand, he was throwing a world class temper tantrum and I was happy to not have to put up with his attitude.  Sad, but true.

Since we had 95% of the family there, Mom wanted a picture will all million of us.  That was a chore and a half to herd everyone into one spot and keep them from running off.  Xanax might have been in order, but we managed.

We ate until we were sick (of course) and parted ways.  On the way down, just a handful of miles from the Lodge we saw a moose!  He was just meandering down the side of the cliff.  Jay flipped the car around so we could attempt to get pictures, but we had turned our phones off to save the batteries.

I couldn't get the damn things to power up fast enough to suit me, but finally, I was able to get out of the car and ease up an incline to snap a couple of pictures.  Being cell phone pictures, they suck, but I finally got to see a moose up-close and personal (but not too up-close).  I was maybe 150 feet from them, though it looks much farther in the pictures.  Stoopid cell phones.  We saw two moose.  They looked like a cow/calf pair. 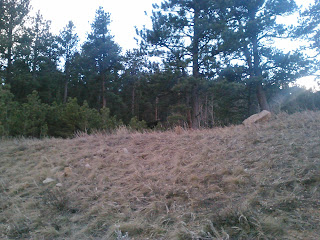 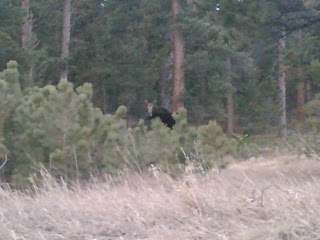 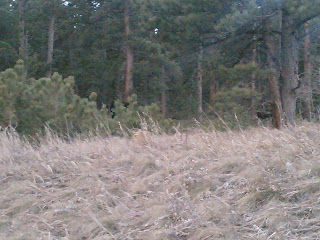 Sometimes my brain scares me.

Like my Million Dollar Idea.  You know, the one that everyone in the family can use 'cept me.

So the other day when Jay and I were out shopping last week, we went into this amazing store that makes homemade soaps and girly stuff.  I ooh'd and aah'd over them and wondered at the creativity it takes to come up with cupcake shaped soap and shower bombs (which, btw, is my new favorite shower item).  I bought five bombs and then went back yesterday and bought five more for my co-workers to try.

Right next door to the girly stuff store is a curiosity store that has pretty much everything under the sun.  Including ice cube trays in the shape of 1911s.  I told Jay I *had* to have the ice cube tray as a stocking stuffer.  Period.  I had to have it. 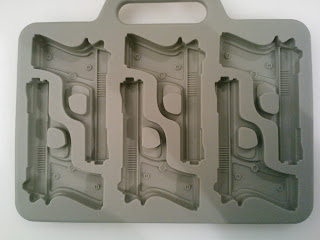 But overnight I realized that I never make ice, but I really, really wanted the ice cube trays.

And my little brain started turning and I started thinking about the cool soaps.  I wondered if I could make soap with the ice cube tray.  Google became my bestest friend.

There were instructions for making glycerin soap!  I made Jay drive all over yesterday picking up the stuff I needed for my new project.

I waited impatiently until I had time to start. When I get my mind set on a project, I want to do it right now!

The directions told me to fill the mold with water and dump the water into a measuring cup so I would know how much base to use.  So I did.  And then I got over it and started just eye-balling it. 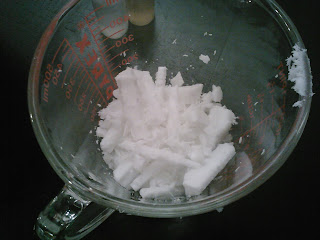 ﻿﻿﻿﻿I chose to use the opaque base so it would look better when suspended in the clear glycerin bar.  I threw it in the "double boiler". 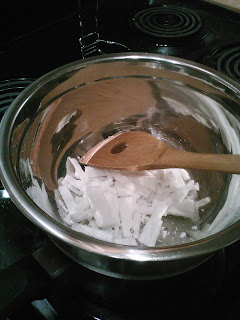 However, I'm not so bright and it didn't occur to me that if I added my red color to my "opaque" (read white, white, white) base it would turn pink, not red.  And y'all know how I feel about pink.  So I quick threw some blue in it and turned it lavender.  Whew, crisis averted.  I also added Aloe and cucumber-melon scent.  Even though they are pinkish lavender, they smell good. 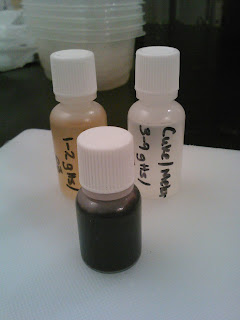 Jay is such a rock star when it comes to my wild hairs.  He jumped in and helped me pour into the molds. 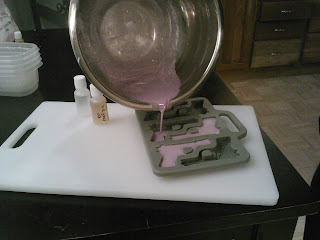 I thought about leaving them like that, but then thought that they'd be easier to handle as a bar, so into the correct size plastic tub they went and I added clear glycerin base.

They're kind of cute.  Cute enough that my first five bars are headed to the Southern Girl Gang on Friday.  I wasn't crazy about my first batch and they were kind enough to take them off my hands.

I like the blue better, but you can't see as much of the detail in the picture as you can of the lavender. 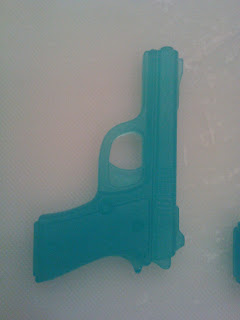 I also can't decide if I like them just molded or placed into bars.  Decisions, decisions.

And since I'm finally finishing this post a half an hour before Thanksgiving day...

And being a breasted American of the vaginated variety, I get cravings.  And ain't nothing right in *anyone's* world when a woman gets a craving.

But not any old popcorn.

Remember back in the day when KMart had a snack counter and you could go buy ice cream, slurpies, and popcorn?

I wanted *that* popcorn.  The old, chewy stale stuff.

I tried.  Oh, I tried buying some good popcorn from the store, but that didn't do it.  I HAD to have KMart popcorn.

I hounded and hounded Jay for a couple of days and finally, we went to KMart yesterday.  The snack counter is long gone, but I was hopeful they still had popcorn.

Unfortunately, they only had two sizes; the small size wouldn't have lasted the drive out of the parking lot.  However, the big size... 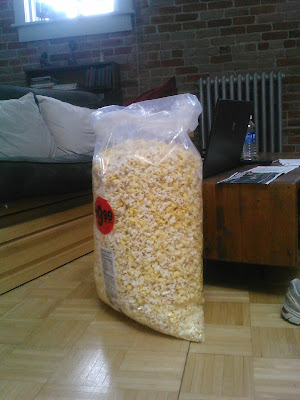 I'm pretty certain that Jay's banking on me being so sick of popcorn by the time this is finished that I'll never look at another kernel again.

Hey, Mom and Bill - guess what we're bringing for Thanksgiving dinner?
Posted by GunDiva at 8:00 AM 4 comments:

Email ThisBlogThis!Share to TwitterShare to FacebookShare to Pinterest
Labels: food memory, I can't make this shit up

The Text I Hoped I'd Never Send

Friday, Jay sends me this text: "Are you on your way home?"

And, sadly, I had to answer: "Got arrested.  Just bonded out."

I'll let that sink in a little bit...

Had time to digest that?

It sucked.  Lots and lots.

You see, my youngest, Monster, has a bit of a substance abuse problem and got picked up for possession of marijuana and paraphernalia.  Since he's a minor, the cops took him to "the hub" and chose to ticket and release.  So he called me to come pick him up.

Only, you remember when my cat beat up the neighbor's pretend dog?


Well, I kind of got ticketed for that.  Apparently, it's illegal for cats to be "at large" in the city limits.

It's a dumb fucking ticket.

Well my court date came around and I couldn't get the time off of work (yes, I know my employer is *supposed* to give me time off for court, but there wasn't anyone qualified to cover my class), so I called the court.  They said it would be okay for me to just mail in the fine.  So I asked how much it was and I was told that I'd be notified by mail.

I work with an attorney who said it would be just a matter of a phone call to have my bench warrant removed as long as I was willing to pay my fine.  Because it's a dumb fucking ticket.  But my attorney friend has a bit of an attention problem.  So for the last year, I've been trying to get him to make that stupid phone call so I can pay my fine.

Anyway, I got called into the hub to meet the popo who had my son.  And they wanted ID.  And I knew I was sunk.

All I could think about was Momma Fargo's stories and I was bound and determined not to end up on my arresting officer's blog.  I was not going to be a dumb shit.  Well, I wasn't going to be more of a dumb shit than I already was.

What I learned from my experience:

Email ThisBlogThis!Share to TwitterShare to FacebookShare to Pinterest
Labels: cat, dog, dumbassery, I can't make this shit up

Jay and I each had the day off today and we wandered around, continuing our Christmas shopping.  I was telling him how much I admire Julie Goodnight and her husband, Rich Moorhead.  They are firm believers in supporting their local economy.  Every year, they try to do a project around their ranch and they always hire in local contractors and workers.  Jay and I aren't in a position to pump the kind of money into small businesses that Julie and Rich can, but we can do something.  And that something this year is to buy our Christmas presents only from small businesses.

And then I started thinking, Mrs Mom had a list of people on Facebook who have small businesses and I thought I'd share a similar list** here.  This is by no means a comprehensive list and if I accidentally forget someone, please forgive me.  Feel free to add yourself or your business in the comments section; include a description of your product and a link.

I *know* there are tons of bloggers out there who are also small business owners.  Please, please, add yourself in the comments section.

**I totally stole this idea from Mrs Mom.
Posted by GunDiva at 6:24 PM 3 comments:

How Did This Happen?

How did it get to be almost Thanksgiving already?

It's next. freakin. week.

Yep, that's CJ.  He and Ashinator split ways a while ago.  I was devastated.  I love that kid.  I feel like we've been through a lot together, what with his crazy-ass mother and all.

He finally escaped the clutches of his evil mother and joined the Navy.  He's officially a corpsman now and off to California to hook up with the Marines.

But, he did make time to go out to lunch when he was home last week.  He's got a girlfriend (I'm in denial, BTW, never mind they've been together like nine months now) and is thriving in the Navy.

I do love this kid and it might seem weird that I went out to lunch with my daughter's ex-boyfriend, but it was so good to see him. Especially knowing how rough his teenage years were.  He and the kids are still close; Ashinator and CJ text each other frequently and the boys still think of him as part of the family.  As sad as I am that he and Ash aren't together anymore, I'm happy that they've found some way to still be a part of each other's lives.

It does my heart good to see him all grow'd up and doing so well.

It does my heart even better to know that he survived having that crazy bitch for a mother :)
Posted by GunDiva at 10:46 AM 2 comments: