The Year of No Numbers

I walked a 5K because I wanted to, not because I felt like I had to.  Nebalee walked with me, but the thought of "no numbers" about made her crazy.  I didn't care about my time, as long as I finished.

I spent a few weeks doing Les Mills' Body Pump with a friend of mine.  Again, because I wanted to.  It made me feel good to complete the workout.  Then summer came and I got Skeeter.  My exercise became working with her.  Ten minutes here and there.

Stacking hay - talk about functional fitness - you can't get that kind of workout in a gym.

I ate and drank what I wanted, when I wanted.  You know what I found?  I can no longer tolerate greasy burgers.  5 Guys used to be my favorite burger joint on the planet.  I can't even get one down now without feeling sick.  I go for days without a Coke, and those of you who know me, know I refuse to give up my Coke.  It's pretty amazing when you feel like nothing is off-limits, how easy it is to "choose wisely".

It's been a surprisingly peaceful year, not worrying about how many calories I'm stuffing in my face or stressing out about how much weight I've lost (or not).  As the year ends, I'm down about four pounds over the beginning of the year (I know this because the doctor still weighs me).

Physically, I'm kind of a mess.  My liver enzymes are out of whack, my LDL is elevated, and I'm tired of being a cream puff.  There has to be some sort of middle ground.

2015 is all about finding the middle ground.

The fact is I do need to lose weight and I do need to engage in exercise (other than just playing with the horses), but is there a way to do it without turning into a calorie-counting bitch?  Without all of the guilt that goes along with knowing I shouldn't eat this and I should do that?

My doctor recommended The Fast Metabolism Diet.  I trust my doctor implicitly; I used to be her medical assistant, so we've built a stronger-than-usual patient/doctor relationship. She believes in the diet and uses it herself for weight maintenance, so I felt good about her recommendation.

I took the time to read the book, and what I read has me excited to give it a go.  It's all about "re-setting" your metabolism.  It explains why calories in/calories out doesn't work for everyone.  I've lost and gained weight a lot since my thirties and my metabolism doesn't have a clue what to do, so it stores everything as fat.  So much of what is in the book makes sense that I wonder why I never figured it out for myself.

Jay and I are going to start the "diet" tomorrow.  I hate to call it a diet considering there is so much food involved, and it's all good, "real" food.  I'll have to re-join the numbers game for a bit (no calorie counting, though!), just the measuring tape once a week to see progress and maybe an occasional scale, but I'm not going to focus on the numbers.  I've had a year of no numbers training under my belt, I think I can ignore them as needed.

Here's an example of what our first week of the "diet" will look like:

Apparently, we have to eat within 30 minutes of waking, which is why our morning snack and breakfast are flipped.  We get up, feed the horses, get ready for work and leave all in a 30 minute time-frame, so there's no way we'd make breakfast.  Snack first, breakfast at work.  The other major key (besides not eating anything processed) is to eat every three to four hours as long as you're awake to keep your metabolism cranking along.

It's Almost Time For Baking Weekend!

Just a few more days and my girls (minus Staci, who is living the life on her boat with her family) will be joining me for baking weekend!  We are a cookie baking factory over the weekend and I can't wait.

However, there is one thing I can guarantee I won't be baking this year and it's these puppies (or should I say cubs?). 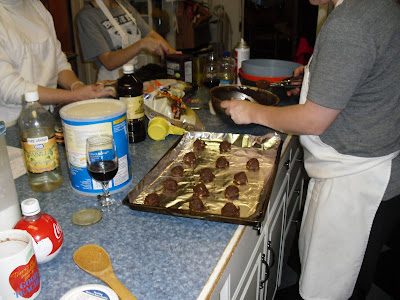 Which resulted in these...

I did zero cookie baking.  Zero.  I kinda felt bad about it, but I was focused on a project I've been contemplating for two years now.  I don't even know where I first saw these Snow Globe Coca-Cola Cupcakes, but ever since I saw them, I've been wondering if I could pull something like that off.


I mean, look at them...
In fact, I was pretty sure I couldn't pull them off, but I've been getting braver in the kitchen.  Last year, we had success with the bococcini.


So I gathered up my courage and hit the stores looking for what I would need: Coke in the "ornament" plastic bottles, rolled fondant, an edible pen, and a red sugar sheet. I followed the directions that I found on Bakerella.


Beel even got in on the act...
I even tried the Cola Cake recipe that Bakerella linked to.  It was one jacked up recipe.  I've never baked cupcakes from scratch, but I'm a direction following fool.  I read the recipe a couple of times, and then obsessively referred to it while I was making the cake stuff.

I brought that crazy concoction to a boil and added it to the dry ingredients, which included a cup and a half of marshmallows...

I then baked up a batch of the cupcakes.  They were awful.  They fell, which was a bummer.  But they didn't taste so wonderful either.  Plan B - store-bought Devil's Food cake mix.  Win!!


While I was waiting for Nebalee to come up to the lodge with my Plan B, I worked on the fondant.  Oh God, what a disaster that was.  The store must have put out last year's fondant, because it was a brick.  I had to break it open and scoop out the inside just to have any to work with.


Staci was a bear making fiend!  I made two.  She whipped out the rest.  Wait...Nebalee made the little cub.  Aren't they cute?
Auto Bot and Kyzzer helped me prep the snow globes...

Mom and Nebalee put snow on the cupcakes after I frosted them... 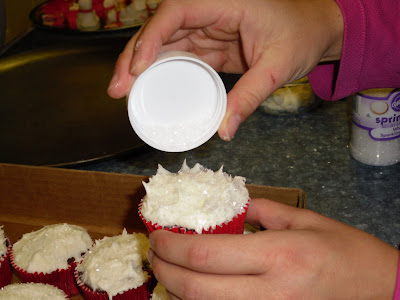 And then I got to assemble...
They're not quite as polished as the ones at Bakerella, but then, neither am I.  I'm so not a professional baker - I'm pretty sure that once-a-year baking doesn't count - but I am beside-myself-excited about these cupcakes! 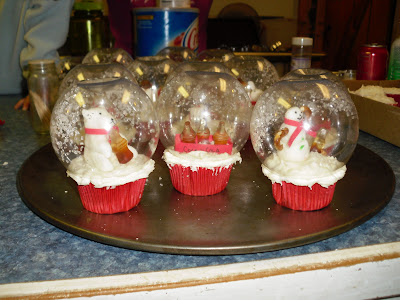 I'll post about the rest of Baking Weekend when I come down from my cupcake success high.
Posted by GunDiva at 7:10 AM 1 comment: