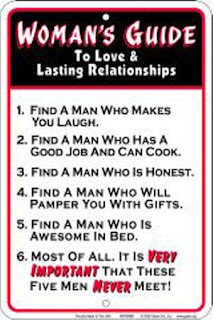 I know we've probably all seen that meme and have laughed. But when I see it, I count my lucky stars that all of the men in my life get along. I'm sure I've written about it in the past, but when I see them hanging out and having fun my cold, dead heart just swells.

Robbie and Mez were among the group of shooters who immediately took me under their wings when I was a baby shooter. I've written in the past about the importance of shooting buddies over on The GunDivas, but I don't know that I've talked here about how important it is for women to be surrounded by men who believe in them.

"My boys" are every bit as important to me as "my girls", and it might have been even more important to me that they approve of, and get along with, Jay. You see, my boys helped me heal from a bad break-up, though they didn't know it. My girls helped too, but in a different way. My girls listened to the sobbing and angst that went along with having my heart broken. My boys showed me my worth and believed in me. They treated me with kindness and respect without ever knowing how damaged I was. They accepted me for who I was: a new shooter who was willing to pull her own weight and learn the ropes. There might have been some hesitation at the very beginning, simply because the majority of the (very few) women who attended the shoots were there only to appease their significant others, so they didn't know what to expect.

There are lots of studies out there about how important a father figure is in a child's life, or failing that, a good male role model. I want to throw it out there that it's not just children who benefit from from good male role models. Having quality men in my life as an adult showed me how I deserved to be treated. I have a great father figure in Bill, but that's not the same as having friends who showed me, through their actions, what I could and should expect.

As important as it was for my girls to approve of Jay when we started dating, it was every bit (maybe more) important for my boys to approve of him. It was equally important that Jay not be threatened by my male friends. As a society, we tend to talk about strong women, but we don't talk about strong men. Let me tell you, it takes a strong man to go into a relationship with a woman who is surrounded by men she has a history with, and who she loves in the same way she loves her girls. 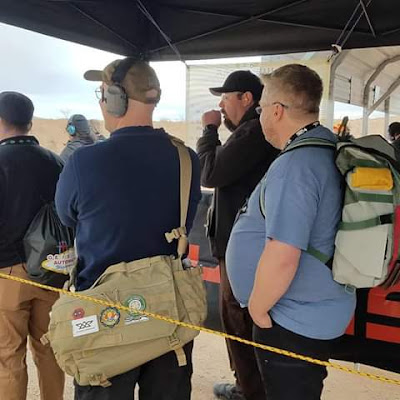 Maybe that's why this picture means so much to me. I have spent a great deal of time this week counting my blessings that Jay and my boys melded so well. Every time I see them together, my heart swells. It's not just Mez and Robbie who Jay gets along with, I'm talking all of my male friends.

Posted by GunDiva at 8:33 PM No comments:

Email ThisBlogThis!Share to TwitterShare to FacebookShare to Pinterest
Labels: my boys, strong men

Monster, my youngest, moved to Arizona a year or so ago. He does that, gets itchy feet and moves. He's the one of my three who just packs up and moves, always has. I'm not brave enough to do that, I'm a Colorado girl through and through and can't imagine living anywhere else (except when it's below zero, then the thought flits across my mind).

Deejo and his family moved back to Arizona a year ago, after Monster did. Now, Monster lives with Deejo's family and it seems to be working.

That was a round about way of saying that I haven't seen my brother or my son in a while. Nebalee found us cheap airfare, so we flew out to spend a few days with them.

It was so good to see my Monster (and the rest of the fam, obvs). We spent one night sitting on the couch, watching hockey. I can't remember the last time I got to hang with him and yell at the TV. 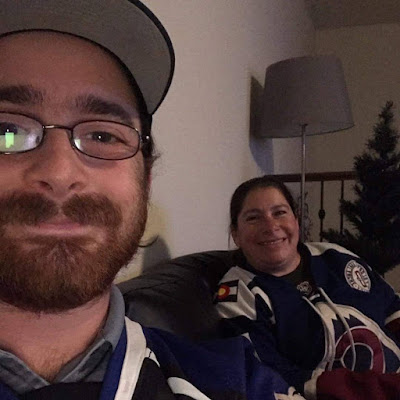 Since we had some free time and wanted to go do something, we put on our thinking caps and came up with axe throwing. I don't know who had the idea, or even where it came from, but that's what we came up with. I got on Groupon and found a place nearby that was reasonable. Nebalee and I got everything organized and the next day, off we went. 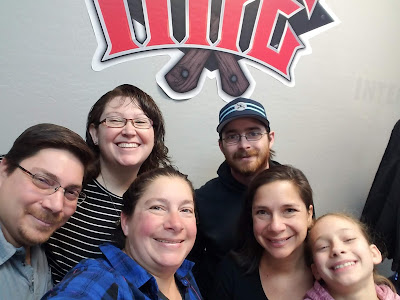 We had a 90-minute session that included some very basic instruction and practice, then we broke up into teams and competed against each other. We started with two-handed throwing, to get the hang of it, then went to one-handed. Because I like to be able to do things ambidextrously, I tried throwing both right- and left-handed. Monster and Deejo also played along with the non-dominant hand practice.

Asset, Nebalee's daughter, was apprehensive at first and didn't really want to keep going after her first couple of throws. It's deceptively harder than it looks. But then she got the hang of it. She got the hang of it so well that she was the only one on our team to put any points on the board when we were playing 21.


I was fairly confident that our team (Axekickers) was gonna kick Axcellent's axe, but they beat us two of three games. It's all good though, we had a great time and the games helped us get out of our heads while we were throwing, and get comfortable. The last game we played was "Survivor" and it was each person for themselves. I was feeling pretty confident, as was everyone else. Holy cow! Asset started off strong and kept going. She beat three or four of us in a row before getting knocked out. Luckily, we all had two lives to lose, so she had the opportunity to come back and redeem herself.

Asset had a bit of a rough start to the day, but stuck with it and started kicking everyone's axe. Monster took to it like a duck to water. The rest of us were pretty hit or miss. She and Monster probably threw the best, each with a handful of X-ring throws in a row. If I had laid down a bet, Asset or Monster would have been the two I'd put my money on to win.

Then Nebalee stepped up. Asset had just thrown three (or was it four) bulls eyes in a row. They stepped to the line together, mother vs daughter, and Nebalee threw her axe. It wasn't a great throw, but it stuck in the 3 ring. Asset threw her axe and I don't know what the hell happened, but her axe throwing mojo completely disappeared. Like - *poof* - gone. Nebalee had successfully knocked Asset out of the competition and had to face Monster, who had also been kicking everyone's axe.

Nebalee had her best throw of the day and ended up victorious. I'm sure if I was a better writer, I could write a tear jerker of a screenplay about how the underdog came from nowhere and beat the two best throwers with the best throw of the day. Just imagine the slo-mo montage with inspirational music as we watch her axe leave her hands and rotate toward the target. The crowd erupts in cheers and the loser gives her a heartfelt congratulations. Everything is right in the world. 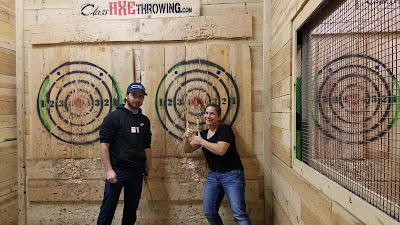 The whole thing was so much fun, but there was one last throw I wanted to try: two axes at a time! If throwing one axe was fun, throwing two had to be twice as fun. It was. 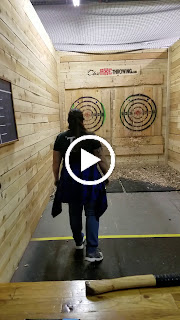 Now, some people might raise an eyebrow at using axe throwing as family bonding, but it was incredible! I think that this is something we'll have to do on the regular. We don't have a nearby axe bar (yet), but once it opens, I'll be taking my other heathens for some mom/heathi bonding. 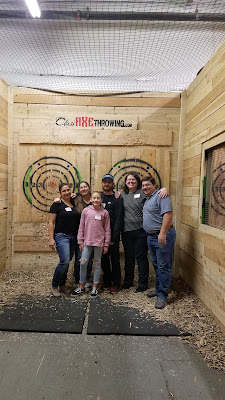