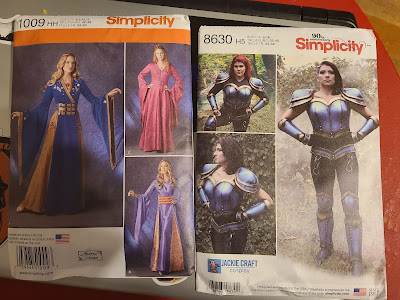 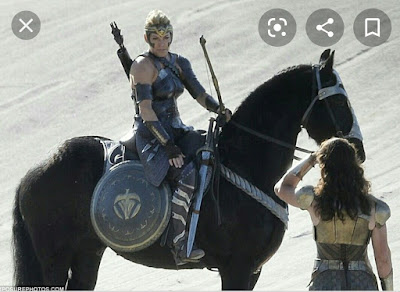 And then I saw a posse-mate had done a photo shoot with her horse for her birthday. It was awesome, she and her horse were dressed up as warriors and it was breath taking! I decided I wanted to do something like that for my birthday.

Ever since I got Skeeter, I'd been tossing around the idea of cosplaying with her. Mostly because I've wanted to figure out a way to turn her into a dragon or a Pegasus. Once that seed was planted, it took root and now I'm obsessed with the idea.

I'll be pushing myself way outside my comfort zone with the cosplay(s) I have planned for my birthday in July. I mean, why do anything halfway?

Not only do I plan on transforming Skeeter into a Pegasus (a Skeeter-sus, if you will), but also a War Horse. I'd initially planned on doing just one cosplay and photo shoot, but since I'll be paying for a photographer and building costumes I might as well do two. Cross your fingers that I can pull this off.

My intention is to blog the experience, though I've been pretty bad about posting on a regular basis. My hope is that by blogging it, it'll give me some accountability.

At an author signing in 2019, I bought a book called Wild Wine Making because I thought it sounded interesting. The author was a bit... well, odd, but very proud of his book. As usual, when I attend an author event, I end up spending more money on purchasing books than I make selling them. But, the book looked interesting and the author assured me it was incredibly easy, so I bought a book for myself and one for a friend.

Jay and I flipped through the book and decided to try one of the recipes for our Christmas Eve gifts. Each year, we make something different as family gifts for Christmas Eve. Last year was two different types of bacon salt; the year before that I canned homemade marinara; one year we made homemade ice cream, etc.

We discussed getting a batch started after we returned from SHOT Show, but we were slackers and didn't actually get around to buying the equipment until the shut-down in mid-March. Suddenly, it was the perfect time to get around to doing the projects we'd been putting off.

We ordered the equipment, and once it arrived we purchased the ingredients for a peach-blackberry wine. Almost immediately we realized that the "incredibly easy" wine recipes were anything but. If we had any experience at all with wine making prior to this, it might have been easy, but we were complete noobs. Luckily, the information we couldn't find in the book on how to make wine was easily found on YouTube. By cobbling the information together, we came up with a plan and turned our mudroom into a winery.

During the primary fermentation process, we stirred the nastiness (it's actually called "must") twice a day for a couple of weeks, adding sugar water as needed, until the yeast slowed down. After that, it was time to strain out the fruit and move the wine to the secondary fermentation vessel. In the book, the author says that a fermentation bag for the fruit is not necessary. Let me tell you, it might not be necessary, but it'll damn sure make your life easier. It took a very long time, and a lot of swearing to strain out the fruit. We made a huge mess, but finally got the wine moved to the secondary fermentation vessel.


Once it was all moved from the primary fermentation vessel (the 6-gallon bucket) into the secondary fermentation bottle (the glass bung (yes, that's its real name)), we fit it with an airlock that allowed the yeasts' gasses to escape, and covered with a cardboard box to keep it cool and dark. If we had a basement, that would have been a better option, but the cardboard box worked remarkably well.

The next day, we checked and saw the yeast were happily chugging along, doing their job.

A couple of days later we "racked" the wine, siphoned it to remove the sediment. At that stage, it was still pretty cloudy and we were still figuring out what the hell we were doing, but we got it racked. 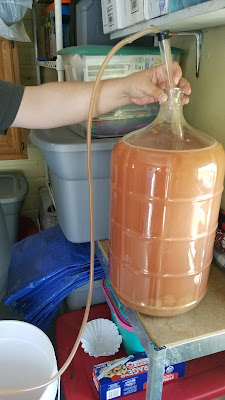 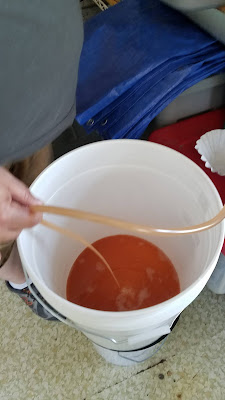 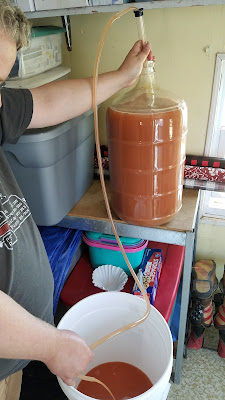 After we racked it the first time, wine making got markedly easier. All we had to do was rack it every few weeks to remove the wine from the sediment. Racking the wine is the perfect time to taste it, and it was much better than I anticipated each time. The problem was, each time we racked it, we lost a bit of volume, so that by the second-to-last time we racked it, we'd lost a full gallon. There was nothing in the book about what to do, but we were under the impression the bung needed to be kept full to decrease the amount of oxygen the wine was exposed to. Not knowing what to do, we decided to add more sugar water to make up the volume.

The next time we racked the wine, it was much sweeter than previously. I complained that it was sweet. Jay looked at me and said, "it's a dessert wine" and thus the idea was born for a Grease-based theme for the wine.

By mid-September the wine was ready ready for bottling. 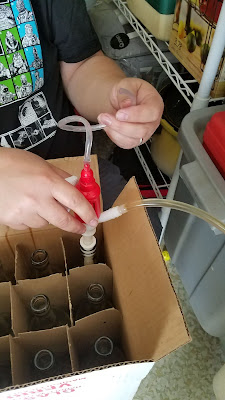 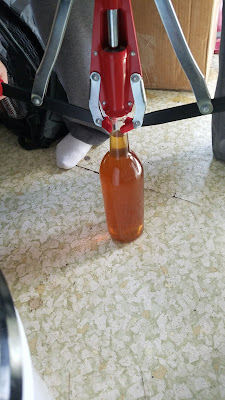 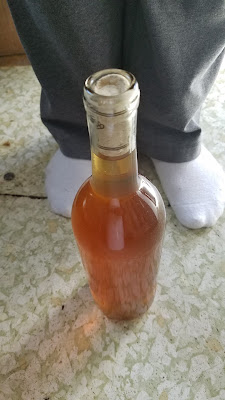 Jay put his graphic design talents to work and made us a great label. I think every year is our best Christmas Eve gift, but this one - the wine paired with Twinkies - was the best. So far. 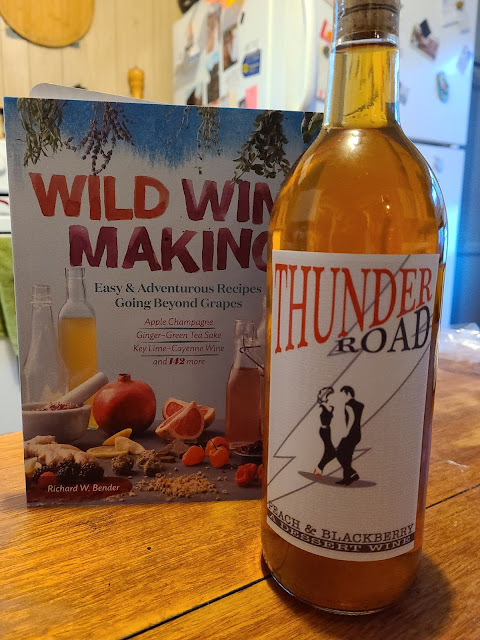 We might not make wine as Christmas gifts again, but we'll definitely be trying again, now that we (sort of) know what we're going.
Posted by GunDiva at 8:55 PM 5 comments:

You know, I think I'm getting the hang of this Noom thing. Really.

I started Noom on October 13, and am currently down 21.2#. As you know, from my whining in my first Noom post, the first few days were hard. But after that, it got easier and easier. There are days when I'm incredibly frustrated with the scale, but overall this has been fairly easy. 21.2 pounds in 15.5 weeks isn't a lot - it's just over a pound a week lost.

Only because it was so muddy and slick that LE and I were laughing about it did I allow that full body picture of me to be taken. My insides (how I felt) definitely did not match my outside (how I looked).

And to be honest, the two don't match up yet, but they're getting there. This is a picture from a week ago, while I was on a road trip with the Shooting Hubby to go take a gun fighting class. I was pleasantly surprised when I looked at the picture.

Even with a bulky hoodie on, I look much better than I did in August. I'm even stronger now than I was then and am happy with my progress. I still have 25# to go, so probably another four months, but that's okay. As long as my insides and outside continue to line up, I'm good.

Posted by GunDiva at 4:51 PM No comments: