Or not, but I'm going to share them with you anyway.

First...drum roll please...Bill has set up a Facebook page for the Lodge.  Look for "Allenspark Lodge B&B".  The other page was kind of orphaned - Bill set it up and then couldn't figure out what to do with it.  Ashinator got him set up with a new one and it's ready to go.  There's a reason why there's not a GunDiva or Tales from the Trail Facebook page; I don't think I could figure out which end is up.

And, the Ashinator is starting her own small business.  Go check out her pics at "LaBrooke Photo Studios" on Facebook.  I know I'm a proud momma, but I love her pics.
Posted by GunDiva at 10:01 PM 2 comments:

Only my spawn would say this:


GunDiva: "Happy Birthday to Digger.  19 years old already.  How did that happen?"

Email ThisBlogThis!Share to TwitterShare to FacebookShare to Pinterest
Labels: birthdays, Digger, I can't make this shit up

This week the guest hostess is Jessica from Stilettos & A Fishing Pole.


Here are this weeks questions (the first 3 are from Jessica)

Who was your high school Sweet Heart?
Jim R.  We were practically married by high school standards - together 18 months.  After we broke up, he started dating the girl he would eventually marry and thus set the pattern for all of my exes.
What is your favorite vegetable to eat?
Broccoli sauteed in butter with garlic.  Yummmmm.
Do you plan on dressing up for Halloween, if yes, what do you have in mind?
I'm horrible at dressing up for Halloween and rarely do it.  I always come up with the best idea for a costume the day of Halloween and then don't have time to put the costume together.
Are you a reality show junkie? If so, what is your guilty pleasure?
Thanks to the hubby, I've gotten hooked on Top Chef and Hell's Kitchen.
and finally
What year did you graduate high school?
1989.  A long, long time ago.

~~~~~~~~~~
In addition to Monday Minute - Happy 19th Birthday to Digger.  You can't possibly be 19, 'cause your beautiful mother is only in her twenties.  And I have to say, kiddo, for all of your good looks - you're welcome.  You really are the product of superior genes :)
Posted by GunDiva at 6:00 AM 4 comments:


I think you'll agree Bill did a better job of it than these two :)

If you're reading this and completely lost, go see Rachel's post regarding Bill's behavior on the trail ride and his poor horse's embarrassment.
Posted by GunDiva at 7:12 PM 2 comments:

Email ThisBlogThis!Share to TwitterShare to FacebookShare to Pinterest
Labels: Bill, Once Upon A Miracle

Compass over at the Livery offered me the use of her new treeless saddle, so I brought it on over to the Lodge and thunked it on Estes (ended up not using it though). 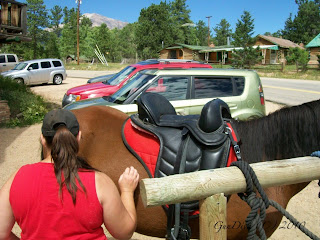 I was completely unsuspecting of the evil swirling around me. Bill was laughing at something, but I wasn't paying attention to what he was laughing at. 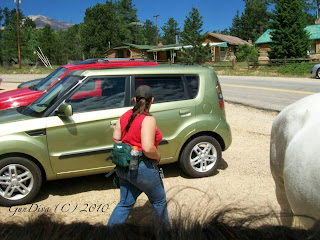 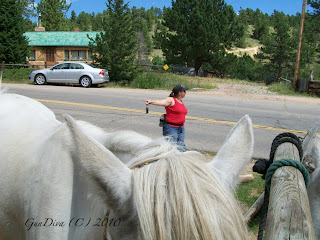 "RockCrawlinChef, did you do this?" 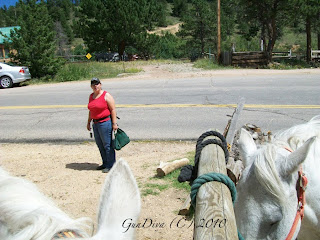 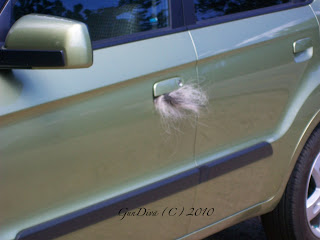 Poor thing may never be the same again.
It gets worse.  Not only did he defile the driver's side door, but he covered all of his bases and got the passenger side door, which I didn't discover until the next day.
Posted by GunDiva at 11:11 PM 7 comments:

Email ThisBlogThis!Share to TwitterShare to FacebookShare to Pinterest
Labels: hair, I can't make this shit up, trichophobia, trichous inductus vomitus

My computer died...not of an ITD this time, but simply from a dead battery.  And then my charger died.  It has been dying a slow agonizing death for months now, but chose a bad, bad time to actually die.

So, while I had a most fabulous time at the High Country Rendezvous and have lots of pictures to share, there won't be any of that going on until my new charger arrives.  I'm sneaking blog reading time in on my breaks at work, but don't have the stolen time to dedicate to writing about HCR.

Please forgive me for lack of comments, I'm skimming all the blogs as quickly as I can at work just to stay caught up, but can't peruse them as thoroughly as I'd like to.
Posted by GunDiva at 7:38 PM 3 comments:

What I Brought Home from Horse Master

I learned so much during the week I spent at Julie Goodnight's, but there's something I physically brought home that I'm so excited about and it's not even horse-related.  Lucy, friend and assistant instructor, brought a Soda Stream to Julie's. 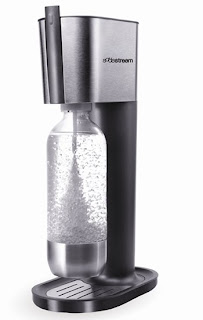 This is pretty much the coolest thing on the planet (aside from Eloise and Ripley, that is).  What this little do-hickey does is carbonate water, to which you add syrup for flavor.  You fill the bottle with tap water, screw it onto the Soda Stream and add gas until it farts three times (which is quite entertaining for the teenagers of the house).
We spend a lot of money on pop in this house.  Yes, I know it's unhealthy, but I just can't give up my Coke.  I'm rarely home, so any Coke drinking I do happens at work - any pop at home disappears.  The kids and their friends can kill a twelve-pack in a day, which adds up quickly.
After I saw this at Julie's, I made up my mind that I wasn't buying any more pop for the house.  It wasn't going to happen.  One bottle of syrup is about $6.00 and makes the equivalent of thirty-three twelve-ounce cans of pop.  The calorie difference between commerical soda and soda made at home is huge!  Each serving has 35 calories compared to the 100+ calories in commercial soda.  The reason for the difference is that the Soda Stream syrup is made with half sugar and half splenda.  I have no beef whatsoever with high fructose corn syrup, in fact, I really, really love it.  I don't really like the taste of splenda, so the "cola" flavor doesn't work for me at all.  However, the kids don't care about the taste.  If they want to drink a pop, they can just make it, 'cause this mommy hasn't bought a single case of it in a month!
They've got a fairly large selection of syrups, both caffeinated and non.  So far, my favorite is the cranberry-raspberry syrup.  RockCrawlinChef is partial to the lemon-lime, and the kids like the cola.
I do have a crazy idea, though, of buying a thing of Coke syrup and trying it out with the Soda Stream.  Wish me luck with that one.
Posted by GunDiva at 6:00 AM 2 comments: 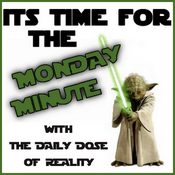 This upcoming Monday Minute is co-hosted by the Anywhoodle NOLA Queen, Kimber! She wrote all five questions.

If you could have plastic surgery, would you? If so, what would you get done?
There are a lot of things I'd like to have done, but the fact that it involves undergoing the knife negates all I might want to do.

What laws have you broken?
I'm really kind of a goody-two-shoes.  Speeding's the worst I've ever done.  Boring, I know!

What is your quirkiest habit?
Not a clue.  I even asked my husband and he didn't have an answer either.

If you only had 3 songs to listen to for the rest of your life what would they be?
I find most songs get annoying if I have to hear them over and over again, so I'm not sure I can answer this without regretting it later.
and finally...

How often do you have sex?
Well, we've found yet another question I won't answer ;)
Posted by GunDiva at 6:00 AM 4 comments:

We Have A Winner!

"Why yes that's a mini Schnauzer in the travel tote under the seat in front of me! Why yes, I paid a solid $100 each way to bring her along. Well, no, I don't think the screaming baby up three rows cost a single cent to fly with her Momma. She doesn't get shoved under the seat, either."

A real conversation between a fellow passenger & myself after a IAH to PIT flight a few years ago. My Schnauzer, Allie, flew very quietly under the seat in front of me in her little pet-tote. The infant, however, who flew for free, screamed bloody murder the entire trip.

Jennifer, I'll be forwarding your email address to the promoter at CSN, so expect to hear from them within the week.  Enjoy whatever it is you find (be sure to let us know what you blow your gift certificate on)!

Rach and Mr. Daddy, while you both cracked me right the eff up with the MILE HIGH club comment, it came in after the deadline for comments.  So, for second place, Rachel, I'll make sure that Mom puts her Cherry Cheese Filled Pastry (or whatever the heck she calls it) on the menu for either Saturday or Sunday.  Hope that's an okay consolation prize.

But the MILE HIGH comment got me thinking...now, stop groaning and shaking your heads, I do think on occasion...

While the MILE HIGH CLUB is usually used in reference to flying, doesn't that also mean that most of the people in Denver and the surrounding mountains are also members of the MHC?  After all, we live a mile above sea level.
Posted by GunDiva at 3:52 PM 2 comments:

It's time to choose the winner of the $50 CSN gift certificate!  The winner will be determined by vote, so hop on over to check out the comments on this post and leave your vote in the comments here.  We'll close voting on Wednesday, August 11th at midnight.

Vote as often as you'd like (and, no, you cannot vote for yourself).
Posted by GunDiva at 8:54 PM 18 comments:

Welcome to my Monday

Hope yours is better.
Posted by GunDiva at 1:50 PM 6 comments:

Email ThisBlogThis!Share to TwitterShare to FacebookShare to Pinterest
Labels: I can't make this shit up

Only In Our House

Ashinator: Why do we have oreos and beef jerky?


GunDiva: 'Cause we went shooting.


And only in our house would that make absolutely, perfect sense.
Posted by GunDiva at 9:17 PM 7 comments: