I did actually make it to the Writers' Police Academy this year! I know I say I'm going every year, but then something always comes up and I can't make it. Instead, I end up as a sponsor. Finally, all of the stars lined up and I flew into Wisconsin. In years past, WPA has been hosted by GTCC in Greensboro, North Carolina, but we've outgrown that facility.

Fox Valley Technical College Public Safety Training Center is the new site of WPA and what a phenomenal facility it is. Since I work at a career college, I might appreciate their facility a bit more than others. I would love to be able to build a similar facility in my area of expertise, so in addition to learning a lot, I did some serious day-dreaming about what my "dream campus" would be.

I flew in on Thursday, in time for registration, orientation, and the first session: 3D Crime Scene Mapping presented by Dr. Joe LeFevre.

The technology available to law enforcement is astounding. Using a Leica scanner, a 3D map of a crime scene can be generated. 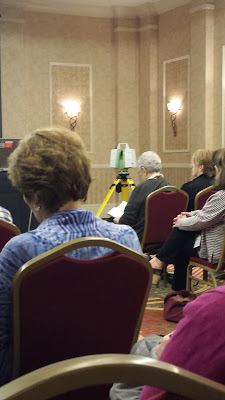 I was surprised to learn that the technology is not actually new - it's been around since the 70s! However, it was not used a law enforcement capacity. Geological survey crews were using these scanners and a brilliant state patrolman saw the opportunity to use it at car accidents to recreate the scenes.

It's essentially a giant laser range finder that takes 50,000 measurements a second and can complete a scan in as little as 2-3 minutes or up to 15 minutes, depending on the settings.

The scan takes the error out of mapping a crime scene; nothing is overlooked or mis-interpreted. Fox Valley was instrumental in developing a new technique in which still crime scene photos can be overlaid into the scan, which is helpful if the victim has been removed from the scene. Overlaying the crime scene photos on the scan helps juries "see" exactly what happened in instances where the scan wasn't done until much later in the investigation.

Though the scan takes just a few minutes, working with the raw data to make a file to work with can take several hours.

In fact, a 3D scanner (different manufacturer) was used by the FBI to collect evidence in the recent Aurora Theater Shooting. Eight days with the scanner ensured that the scene was properly mapped and nothing missed. I have to think that it played a small part in putting the bastard away for the rest of his (hopefully short) life.

Posted by GunDiva at 3:23 PM No comments:

You know, for a writer, I don't get much writing done. I always have grand intentions of breaking out the computer when I get home from work, but it rarely happens.

I am currently revising TALES FROM THE TRAIL, adding about ten stories, including Estes' final chapter. It should have been included in the first edition, but her death was too raw and I'm just now ready to write about it.

The second book in the LYON'S ROAR series in flitting around in my brain. I even have the first chapter written, but it scares me a bit, so I'm finding it difficult to move forward. Next week, I'll be headed to Wisconsin to the Writers' Police Academy - a move I hope will help light the fire under my butt to sit down and get the next book out.

It was at the 2010 WPA that I learned the method by which Faceless Bad Guy used to enter Stacy Lyon's house. Each year, the WPA gets bigger and better, so I have no doubt I will return full of ideas that will appear in future books.

I leave on the 20th bright and early and return bright and early on the 23rd. The only decent price I could get back was at the butt-crack of dawn, so I'm going to miss the debrief on Sunday, but I'll have two and a half days of learning under my belt by then. (And I'll be back in time to see the premier of Fear the Walking Dead!)

I am pretty bad at posting to Twitter (@CSWilson_Author), but I'm going to work on it while at WPA. If you want to follow along with me and the other 299 authors who will be attending, watch #2015WPA for updates.

I'll also be posting cool things on Instagram (AuthorCSWilson), and my Facebook page (www.facebook.com/AuthorCSWilson), so if you think about it, jump on over to follow along.
Posted by GunDiva at 9:07 PM No comments:

This morning when I started Salome, a weird warning popped up on her screen. It said, "Battery Discharge Warning: please use system with engine running".

Completely weird, but I shrugged it off because I'd just started the car and knew the alternator would recharge the battery. Except that a mile down the road the same warning popped up. I started to get worried about the third or fourth time it popped up. The warning continued to pop up every thirty seconds (yes, I timed it) for my entire commute. I was convinced that I was driving on borrowed time, that something had happened to the alternator and that I was driving on battery power. I even skipped stopping for breakfast because I was concerned that Salome would die any second.

I made it to work without getting stranded on the side of the road and after class, I called the service department at the dealership, who agreed that it was worrisome and that I should take Salome in. After some finagling, I managed to arrange for Monster to borrow the Ashinator's car to follow me to the dealership just in case she died.

I had intended to just drop her off and go back to work, but they assured me it would take just a few minutes, so I sent Monster back home. By the way, "just a few minutes" translated into two hours - but they were productive hours.

The service manager came out to tell me I was past due for my oil change, which I knew and had scheduled an appointment for next week. He offered to just do it while they had her, so I agreed. Then he told me there was a recall on one of the throttle pieces, which I also knew, and he offered to go ahead and do it. As he was walking away, I asked about my passenger seatbelt.

From the first week, Salome's front passenger seatbelt wouldn't retract all the way and I'd complained about it at every oil change. The first time, they kind of patted me on the head and told me that the detail people hadn't removed all of the protective tape and that's what was binding it up. They removed the tape and sent me on the way.

But it didn't fix the problem, so the next time, I raised a little bigger stink about it. They kind of patted me on the head and sent me on my way again. The third time I went it, I raised an even bigger stink and they agreed to order a new seatbelt mechanism.

I explained the whole thing again to the service manager and he agreed to fix that as well.

Some time went by.

My phone, which I was reading a book on, died.

A bit more time went by.

Finally, the service manager reappeared with a stack of papers and I got excited, thinking Salome was finished. Instead, he had one heck of a story for me.

First, they couldn't figure out why the sensor kept throwing up the battery discharge warning, but the battery and alternator were in good shape. No problem, they checked it out and that's all I asked.

Salome was assembled in Georgia by robots on an assembly line. No big deal, I knew that. However, what I didn't know, and what they were surprised to find, was the cause of the seatbelt issue. It seems that the robot responsible for bolting on the seatbelt mechanism lost it's socket. It tightened the nut on the bolt and the socket apparently broke off and went with the car. Honestly, that's not too surprising, I mean, how many times have you snapped the socket off of a wrench?

I bet it happens a lot and then the socket probably just falls off before the next stop on the assembly line/conveyor belt. But Salome must have really liked that socket and held onto it. When the body panel robot put the body panel on, the socket didn't break free, it was jammed between the A-post and the body panel. The panel torqued the socket just a bit, just enough to knock the seatbelt mechanism out of alignment, so it wouldn't retract.

I wasn't crazy, and I wasn't making it up, and they really couldn't just pat me on the head and send me on my way. While it's one crazy-ass story, at least I feel a bit vindicated.

But so help me if that damn warning light comes back on ...
Posted by GunDiva at 8:27 PM 1 comment: