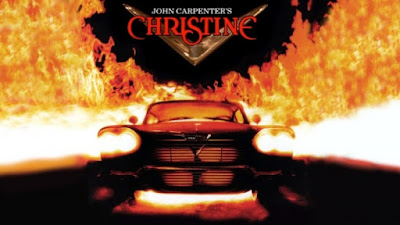 I was telling my work wife about some of these adventures and mentioned in conversation the car's name. She looked at me and asked, "Didn't Christine kill her owner?"

Ummm...I didn't know what to say to that. I mean, she had a point, but I'm not Christine's owner, Deejo is. I love my brother and all, but she is his car, so if she chooses to live up to her name sake, well, I'll miss him. (Jokes, y'all, jokes, just chill out.)

At this point in our adventures, I'd learned to laugh at the absurdity of it all. I was beginning to feel like Christine and I had sorted each other out and that we were getting along fine. There was the occasional, "really, Christine?" moment, but our adventures were petering out. At least, I thought they were.

A day or so before Deejo and I traded cars back, Christine and I drove to work without any problems. It was just a plain ole commute, and kind of boring. Like I said, I was beginning to feel like we'd reached an understanding and we were going to live in harmony until she went back home.

I thanked her for nice ride to work when I parked. I got out of the car and went about three steps before she beeped at me. Not the normal "doors are locked" beep, but more of a "hey, pay attention!" beep. I walked back and opened the door, but didn't see anything amiss, so I closed her door and walked away. Again, she beeped at me.

I still didn't know what the beep meant, but everything looked okay, so I reached into my coat pocket for the keys to manually lock her doors.

The problem was that there were no keys in my coat pocket.

So I checked my other coat pocket.

I frantically patted all of my pockets: coat, pants, shirt. There were no Christine keys anywhere.

At this point, I was beginning to panic, but tried to calm myself down by reasoning that if the keys weren't in my pocket, they had to be in Christine. I opened the door and looked everywhere, but there were no keys.

The thought struck me that she had allowed me to start her and drive off with the keys still hanging in the kitchen. It's about ten feet from the key hanger to where I park and there's a window. Now, I don't know if those things work on line-of-sight or what, but I know that I've never had a push button start car and, frankly, how the shit works is magic in my eyes.

By this time, I'm in full-blown Oh Shit mode and attempt to call Deejo. If she did, in fact, allow me to start and drive away from the house with the keys still hanging on the hanger, I was now stuck at work. I took some comfort in the fact that if I couldn't start her to drive home, no one else could start her to steal her.

I left Deejo a terse, "call me" voice mail, then shot off a quick text to Jay asking him to bring me the keys when he got off work. I frantically and obsessively checked all of my pockets again, just in case I missed them the first time.

There was nothing to do but laugh at the situation. I was laughing so hard at the absurdity of it all that I had tears. I shared with my co-workers what I believed to have happened, and they were laughing along side me (or maybe at me).

I thought, "Bill is going to love this story," so I called up to the lodge and, in between laughing fits, told him what happened. By this time, I was convinced Christine had allowed this. She had already shown me her wicked sense of humor and I wouldn't put it past her. Bill calmly explained that there was no way I could have driven out of range of the keys, that the push button start cars all have a kill switch so things like this didn't happen.

I told him that Christine had her own mind and she did what she damn well pleased. She might have a kill switch, but she also loved messing with me. Under Bill's advisement, I went back out to her and looked for the keys again. I'd already been through her interior looking for the keys the first time (and the second and third), but to humor him, I went back out.

I climbed down into the driver's seat, and started searching all over again. They were nowhere. Seriously, there were no ... wait, what was that little glint of metal? I shifted position and looked where I thought I saw the glint of metal between the console and the seat. At first I didn't see it, but when I shifted position, I saw it again. Barely a quarter of an inch of the key ring was visible, but it was lodged between the console and the seat adjustment bars. I couldn't reach them.

There was nothing to do but laugh again, though this time there were swear words involved with my laughter. Back into the building I went to find something to fish out the keys. With the help of two work study students and a wire coat hanger, we were able to finally retrieve the keys.

As I walked away from Christine with the recently recovered keys, I'm certain I heard her laugh when she gave her "doors are locked" beep.

Now, there are some people who would say the keys just slipped out of my pocket and fell between the seat and console. Those people have not spent enough time with Deejo's curvy girl, Christine.
Posted by GunDiva at 6:00 AM 1 comment:

Not only does Christine consider herself an agent of Karma, she has also appointed herself Chief of Food Consumption.

The day after I rushed her through her meal, I offered to run and pick up lunch for my co-workers. Deejo had warned me that ordering through a drive-thru could be ... challenging. I assumed the challenge was because Christine is so low-slung. I mean, at five-foot tall, I have to climb down into her. In Salome, I'm pretty level with the drive-thru windows, so I mentally prepared myself to have to reach UP to the drive-thru windows.

I placed my order and drove to the first window to pay. Yep, had to extend my arm almost all the way up to hand my card to the cashier. No problem, I'd planned for that and pulled as close to the building as possible so that I could reach up to the window. I was mentally patting myself on the back for navigating the "challenge" of going through the drive-thru.

At the next window, they passed my sodas down to me and I got them settled into the cup holders. I reached up for the bag of food, grabbed it, and tried to bring it in through the window.

Like with the laundry, I thought I'd angle the bag and give it another go.

I panicked slightly, and went to open the door, so I could reach around the door and bring the food in through the door. Except that I'd pulled in so close to the building that I couldn't open the door without dinging up Christine.

Remembering that we solved our laundry lesson by removing some of the clothes, I took part of the order out of the bag and set it on the passenger seat, then tried again.

Christine showed me I hadn't fully learned my lesson and refused to allow me to pass the bag of food in through the window again. So I took more of the order out of the bag and set it on the passenger seat. We repeated this over and over until just one item remained in the bag, at which time, she graciously allowed me to bring the bag into the car.

I'm certain the people in the car behind me were laughing their asses off watching me struggle. I mean, if the roles were reversed, I would have been laughing right along with them.

I quickly put all of the removed food back into the bag and drove back to work, alternatively cussing at Christine for being a pain in my ass and trying to explain to her that all of that food wasn't just for me.

Lesson learned, you Chief of Food Consumption bitch.
Posted by GunDiva at 7:42 AM 1 comment:

The time finally rolled around to feed Christine. She gets excellent gas mileage for a sports car, which meant I had to fill up after two and a half trips to work.

I pulled into the gas station and swiped my rewards card. I knew we had accumulated enough points for $0.10 off per gallon, but was pleasantly surprised when the computer asked if I wanted to use our $0.30 off per gallon. Being only partially selfish, I opted to use $0.20 off and leave the remainder for Jay to use next time he filled his tank.

Smiling with happiness at my good fortune, I began feeding Christine. But, good lord, she was taking forever. Even with the gas pump handle open all the way, she was taking her own sweet time filling up.

I watched the counter on the pump ever so slowly tick upward. My happiness quickly turned to frustration.

"Oh, for fuck's sake, Christine, hurry up! I've got to get to work at some point this morning," I grumbled at her.

Seconds later, the pump clicked off.

"Thank you," I said and removed the nozzle. I glanced at the pump and was slightly puzzled that she only required seven and a half gallons to fill up, but the pump had clearly clicked off and I wasn't going to risk overfilling a car that wasn't mine.

I slipped down into the driver's seat, waited while Christine kindly moved my seat to my programmed settings (she sometimes goes on strike and I have *gasp* manually move my seat into position), and started the engine.

When I noticed the gas gauge only move to half a tank, I just shook my head. Christine obviously considers herself an agent of Karma; rushing her meal was definitely an offense in her eyes.