It's a Double Duty Day!

I'm at a loss as to what to get the Bionic Cowgirl, so I'll just have to share one of my favorite most recent pictures of her. (I did figure out a gift for her for Mother's Day ... eventually.)


Mom was introducing Skeeter to the joys of massage.  She learning bits here and there from Compass and Skeeter is a willing practice subject.  Mom's also teaching Skeets to allow her to use her body for stability as Mom climbs up and down of the black tub. 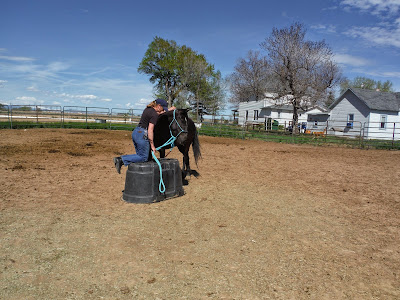 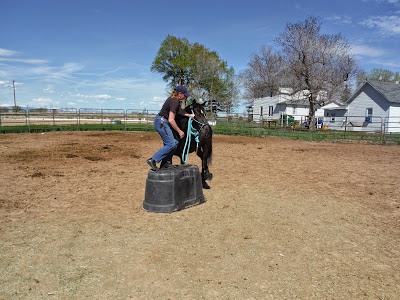 Skeeter pretty quickly figured out that if she helped Grandma up onto the black tub, she'd get a nice back rub out of the deal.  Could be a handy tool in the future.

Jay's birthday falls on Mother's Day this year, so he'll get a joint Mother's Day/birthday celebration on Monday.  I wanted to get him a Justin Dunn sidepull bridle, but the one he (we) want hasn't been released by Weaver Leather yet.  It was supposed to hit the stores in April, but we're still waiting.  I panicked about his birthday present - I had made up my mind that I was going to get him that bridle, so when May rolled around and it still hadn't been released, I had to go back to the drawing board.

I found the second-best birthday present ever and ordered it.  Unfortunately, it won't arrive until June 23 according to the shipping record.  It says it shipped on May 5, but won't arrive until the end of June?  It must be on a slow boat from China or something.

It is a pretty cool gift, if I do say so myself. I have no idea where we're going to put this present, but I know it will make him smile.