A Girl and Her Gun

Last night I watched one of my favorite movies, The Shooter, with Mark Wahlberg (my, has he grown up nicely!) which always reminds me of my dear friend and fellow Gun Diva, Tara Janzen. Tara and I have been shooting buddies since I helped teach a firearms class she was taking for research seven or eight books ago (it's been awhile). The movie always reminds me of when we were learning to shoot long-range, 1,000 yards, after she built "Kid's" sniper rifle. I would swear that the original Bad Boy who taught us to shoot long-range was a technical advisor for the film, as some of the phrases are straight out of his mouth. Each time I hear, "Slow is smooth; smooth is fast" I hear it in his voice, not Wahlberg's.

Although I love the movie there are just a couple of things about it that make me absolutely insane. First, the minute your head comes up off the rifle, the lens covers go down. Should be automatic. If not, that's 10 push-ups :) Tara and I only had to do a few before we remembered to flip the lens covers down. Second, while Wahlberg handles his weapons well, he's missing the connection with the weapon. I would not have even noticed had I not seen someone develop that connection and it makes all the difference in the world. 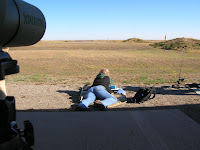 I was at the range with Tara and the Bad Boy getting ready for an upcoming match when I got the best gift in the world; I got to witness, first-hand, the connection being made. There is something absolutely wonderous and magical when a shooter and her rifle become one. Tara had been shooting and took a break so I could shoot. When she laid down with her rifle the next time she just breathed herself onto it. Between one breath and the next she and her rifle joined; they were no longer two discrete critters, but one living, breathing unit. It took my breath away to see the birth of Tara the Shooter. Before, she had been Tara who shoots.
That was a couple of years ago and I can still close my eyes, see the range, watch Tara lay down behind her rifle, take a breath, lay her cheek against the stock, exhale and become one with her rifle. I've been lucky enough to witness this a couple of times with her and each time it takes my breath away; it is the most beautiful thing I've ever seen.
Posted by GunDiva at 6:02 AM