The other day I wrote about my brown boogers and how it meant that I'd been outside "doing stuff" and brown boogs are a good thing.

Wednesday's brown boogs are a little different.  Yes, I went out on a ride with Mom and, yes, I might have gotten a few brown boogs from the trail, but they couldn't compare to the ones I got from making cookies.

Yes, you read that right.  I got me some brown boogers from making cookies.

I made three double batches of Chocolate Aztec cookies and while standing over the KitchenAid, slowly adding the dry ingredients to the wet I realized I was inhaling the cocoa dust.  Bill and I were joking about it, and as often happens when we're bantering, it got out-of-hand, which is how we came up with chocolate-flavored boogs. 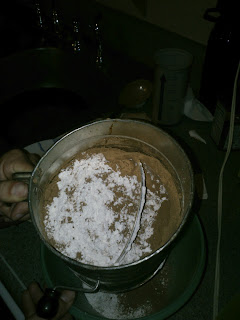 No, I did not take a picture.  Nor did I attempt to get a sample to taste to see if they were actually chocolate-flavored, but one could reasonably assume that they would be.

The plus side is that we ended up with a whole shit-ton of cookies (we made extra just in case, 'cause no one wants to run out of those babies). 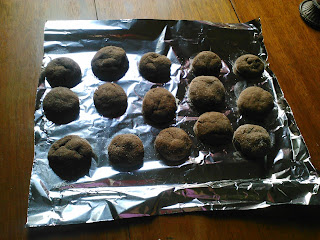 The down side? Allie-bird, my step-dog, found them on the table while RCC and I were out and ate an entire gallon-sized zip-lock bag of them.  There were three dozen in the bag that I'd saved just for us, since the rest were already spoken for.  We found a two-inch square of the zip-lock.  That's all that was left.  I guess we were lucky Allie hasn't gotten sick from eating all of that cocoa and cayenne, but we were not counting ourselves lucky Wednesday night when we wanted some.
Posted by GunDiva at 12:02 PM

Email ThisBlogThis!Share to TwitterShare to FacebookShare to Pinterest
Labels: Baking

"and as often happens when we're bantering, it got out-of-hand"

I think I might have skinned and eaten the dog.

Wow those baking photos might have almost made me hungry if I had been able to get the vision of your "brown boogs" out of my head.

This is not to imply that the Bionic Cowgirl is completely innocent - she was involved in the getting out of hand, too.

That's awful! But you're a better person than I am! I would have assumed that it was someone else's cookies that got gobbled by the evil dog! :)