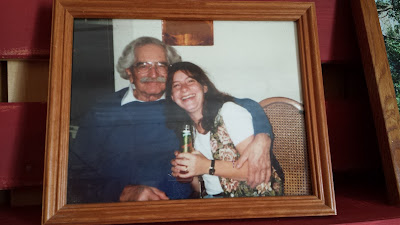 My ex-husband and I bought a house in Loveland shortly after Monster was born. We couldn't afford it, not even close, but his parents' friends were selling it and his parents decided to buy it with us.

This picture of me with Dr. Michael Charney was taken at our house warming party. Doc was one of my favorite instructors at CSU - so much so that I became one of his many teaching assistants. He was a world renowned forensic anthropologist, and I fell in love with the field of forensic anthropology the second I stepped into his osteology class. The second semester, I took his facial reconstruction class and my fate was sealed. I had to work for him, and I did until the day he died and then some.

I had the pleasure of learning from him for three or four years and was convinced that if I didn't get into medical school, I would end up in his field. I expected him to live forever and just assumed that he'd be around to help me in my career. Unfortunately, he was not immortal and died in the hospital of pneumonia. The team of TAs finished teaching out the semester, which just wasn't the same without him.

The kids loved visiting his lab, a small A-frame on CSU's campus. Rows and rows of skulls lined three walls of his office, the fourth wall was shelves loaded with boxes of bones that the families' of the deceased had donated. You would think, being surrounded by all of those bones would be creepy, but it wasn't. It felt like being among friends, strange as that sounds.

You can see in the bonus picture, the rows of skulls lining the wall behind Doc. He left instructions - and made them well known - that his bones were to be articulated (wired together) and sent back to CSU. Doc's office, the A-frame, has been turned into a storage shed or something, so he now keeps someone else company all day long. He now permanently resides in an office, posed the way he often sat in real life.
Posted by GunDiva at 8:00 AM