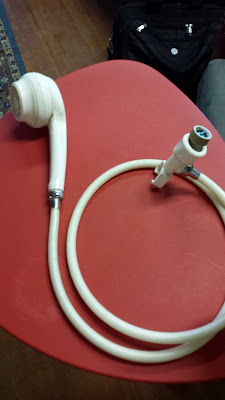 Sometimes, it's the silliest things that can make me nostalgic. Take, for instance, this shower head. It finally gave up the ghost and I'm pretty sad about it. You see, I bought that shower head when the kids were little. With three kids as close in age as mine are, it was far easier to line them up in the bathtub and hose them off with the shower head than to draw baths for them.

I bought this wonderful Waterpik in 1996 and it has moved with me ever since. No matter how many moves the kids and I made, the first thing I did was remove the old shower head and replace it with this. When we moved out, I simply put the original back on and the landlords were none the wiser for it.

Even after the kids moved out and Jay and I moved to Small Town, Colorado, the shower head moved with me.

I replaced it Friday with a new one that I already hate and I haven't even used it yet. I went with an economical version, but in installing it I realized it wasn't going to cut it. I'll use it, but only until I can buy a real Waterpik to replace it with. I should have just dished out the money in the first place instead of being a cheap ass.

In the meantime, I'll mourn the loss of the one item I've carried with me since the kids were babies.
Posted by GunDiva at 8:00 AM