You may remember from my last TST that I'm a loser who didn't get her husband an anniversary gift.
However, I LOVE the gift he got me, so I got over being a loser pretty quickly.  He brought Eloise into my life and I lurve her very much. 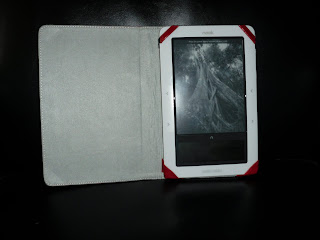 I swore I would never give up "real" books - and I won't.  In fact, I've got another on the way that I promised to review in June.  So, no, real books are safe in my house, but they may become a little...neglected.
I initially coveted the Kindle (c) (<---I don't know how to make the little copywrite sign) and kept telling RCC and the kids that I wanted one for traveling.  It doesn't matter how many books I pack to travel with, I always finish my book with twenty minutes before boarding and then I have to run to the airport bookstore and pay bookstore prices.  I hate that!
I'd not heard much about the nook(c) and had no clue what it could do.  RCC initially went into B&N to get me a book for our anniversary, but started talking to the nook guy and ended up buying me Eloise.  I really, really lurve her.  He done good.  She's super easy to read and buying books is even easier (as long as you have a B&N account).  What I really love is that I can prop her up in bed (I'm a stomach reader), plop my chin down on my hands and read away.  When I need to turn the page, I just swipe my finger across the touch screen and voila! the page turns.
I can also sideload music from my iTunes(c) library, so I can listen to music as I read.  There are also more than 900K free books to choose from.  This takes some patience, as some of the books are self-pubbed crap, but there are also some excellent books in the "free" store.

My only two complaints about Eloise: 1) her battery life and 2) she's kinda nekkid and exposed without protection.  I could solve complaint #2 and did.  I bought her some nice red leather clothes, which she looks stunning in. 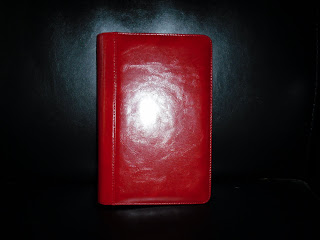 Now, complaint #1:  "...an avid reader should be able to read 7 - 10 days on a single charge".  I've had Eloise in my life for two weeks now and have had to fully charge her three times.  It seems that "avid" reader is a few steps below my "voracious" level.  The best I've gotten out of Eloise is about four days.  That doesn't really worry me, but it is an inconvenience.  RCC said that the guy at B&N did tell him that there were ways to increase the battery life, so I'll be stopping in there sometime soon.
One more thing I love about Eloise - there are B&N stores everywhere, so if anything goes wrong, I can just take her into the store.
And the store...they're doing a 5-week promo, where I can download a book a week from a bestselling author.  I just have to go into the store, show them Eloise and pick up my coupon.  Actually, any one can participate, whether they've got a nook or not.  You can go to Barnes and Noble's website and download their free e-reader, which then qualifies you for the ebook promo.  And, no, I'm not being paid for this - I just love it so much, I had to share it with everyone (including the ER nurse while RCC was dying from epiploic appendagitis).

BUT...RCC's not the only one who can buy good gifts.  Check out what I got him for his birthday (they were back-ordered and took forever to come in)... 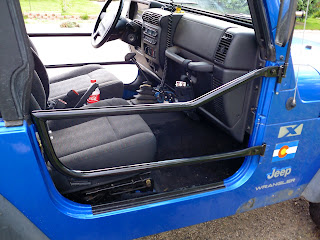 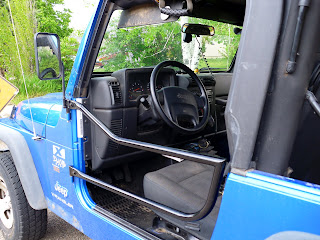 No, it's not the Jeep, but the new tube doors and mirrors. He's pretty excited about them, but hasn't been able to drive his Lil' Blue Box due the the narcotic pain meds he's on, so he's had to admire them from the couch. We have to go to the store later, so maybe he'll get to ride in Lil' Blue Box with her sexy new doors while I drive.
Posted by GunDiva at 6:00 AM

If Eloise needs a new home, I'll adopt her...
Bill

You may have just peaked my interest in the Nook. I also seem to recall mention of semi-matching ARs as anniversary presents to the two of you. Did they happen or what? If they did, post some gun pron already. If they didn't, bummer.

Bill, you've already tried kidnapping her - I'm not going to let you adopt her.

K, we're still looking at ARs. Problem is, we can't decide if we're going to build them or buy them. The cost is pretty much the same either way once you figure in the accessories. Probably end-of-summer late anniversary gifts. Because I thought we were getting ARs, I didn't get him anything for our anniversary - but I did good on the birthday present (at least according to him) and his birthday is only four days before our anniversary.

GB Girl - she is hot stuff in that red leather. And she feels a little Bible-esque. When I'm carrying her around, it feels like I'm carrying my old leather-bound Bible around. Kinda freaky, but I've gotten used to it.

KacyK -Lil' Blue is a purty little girl, but I about fell over at the cost of those doors! Bent tubing costs a lot of money. But it was worth it to see how happy RCC is with them.

So glad you were able to find appropriate apparel for Eloise! :)

So...I looked up how to extend my battery life and it's very simple - just turn off my WiFi. I can do that. I only need it connected for updates or book purchases, otherwise all it does is suck my battery dry.

K - I forgot to address this in my earlier comment to you...so worth it! I know you read as much if not more than I do, it's worth every penny (and it's a lot of pennies).

Jealous. I've been coveting a Kindle but this sounds great!