(Except for maybe our wedding day.)

While flipping through a tourist book on Memorial Day, I ran across one of "Colorado's Best Kept Secrets" and promptly decided that we were going to go visit.  Jay, bless him, was game, even though neither one of us really gave a thought as to how long it was going to take us to get there.  We kinda went, "Alamosa?  That's, what?, three-four hours from here?  Sure, let's go."

We got up way too early in the morning and headed south.  Six hours later, we reached one of our destinations, the Great Sand Dunes. 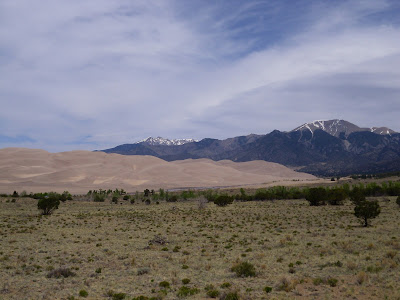 Neither of us had ever been there and weren't sure what to expect.  What I didn't expect was essentially the perfect beach.  Perfect, for a landlocked person like me.  Warm, soft sand and just enough water to cool off in. 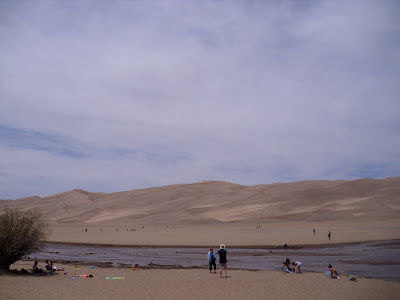 There were lots of families there, settled in for the day, and I immediately wished that I'd taken the kids to visit when they were little.  Since our trip was so impromptu, we weren't really prepared, so we improvised and went for a wade. 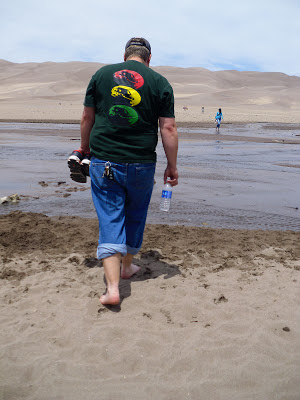 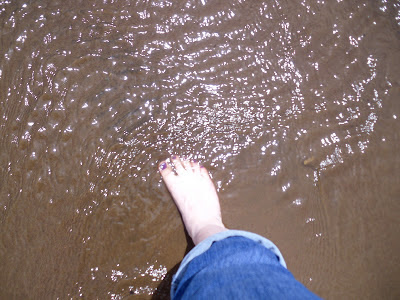 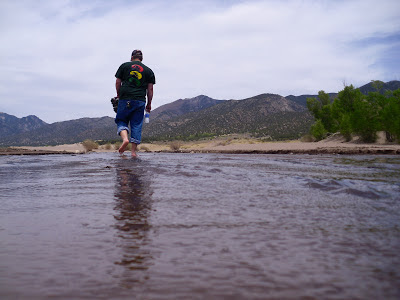 At first, the water was shockingly cold, but since it's only a couple of inches deep, it didn't take long to acclimate.  We wandered through the water and back up the other side, stopping to play on a branch in the water. 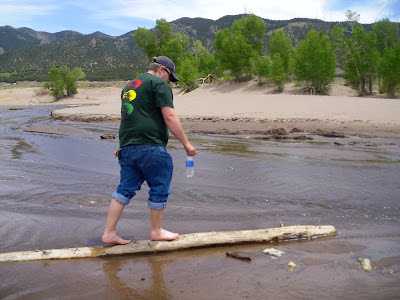 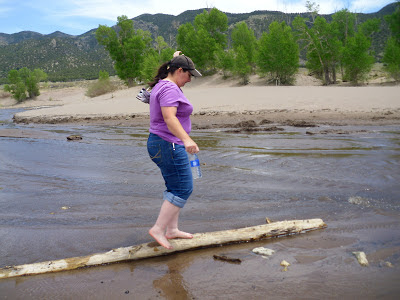 After spending about an hour playing in the water and sand, we decided to go to our primary destination, Zapata Falls.  The Sand Dunes had been an afterthought, really, when we decided to load up and go.  I loved them and wish we'd planned to camp out, because there is so much to do.

Zapata Falls isn't far from the Sand Dunes, only about eight miles south. We'd actually passed the entrance on our way to the Dunes.  The directions were simple, turn off at the sign and follow the dirt road three miles to the parking lot.


The trail is well-groomed and super easy to follow, even though it goes up.  Now, I know I'm out of shape, but I didn't think I was *that* out of shape.  I was embarrassed as a native to be huffing and puffing as much as I was getting up that hill; you'd think that I was a flat-lander, not a mountain kid if you'd seen me trudging up the hill.

We made it, though, with only one stop to sit and rest our legs.  At the top of the trail, there is a nice seating area, where the less adventurous could just sit and watch the water (or wait their turn to enter the falls). 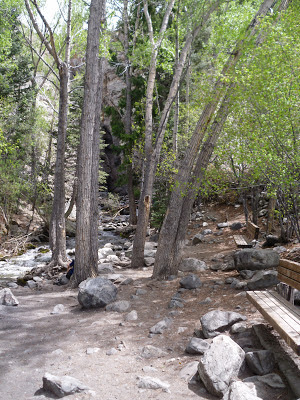 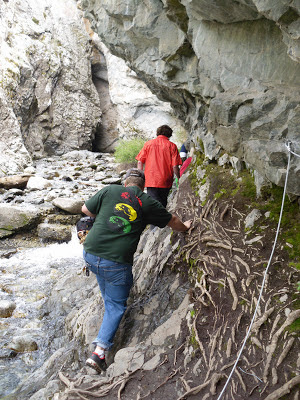 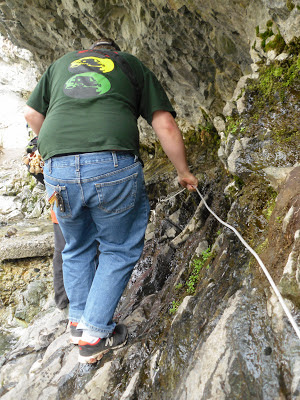 I felt like I was trying to imitate a mountain goat, sticking so close to the rock wall and trying to stay out of the water.  Boy, was that dumb.  When the guide book says you have to wade into the crevasse to get to the waterfall, they meant that you have to wade in the water.  I made it all the way to the entrance to the cave with dry feet and then promptly slipped off of a rock into the water.  At that point, I threw up my hands and said, "screw it", and slogged my way upstream, ignoring most of the stepping rocks.

I thought the water at the Sand Dunes was cold, but I was sorely mistaken.  This glacier run-off was frigid and it only took a few second for my toes to get very, very cold.  But it was so worth it. 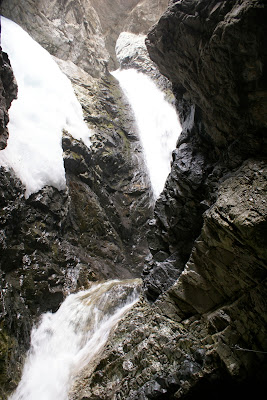 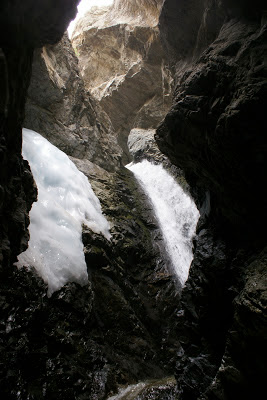 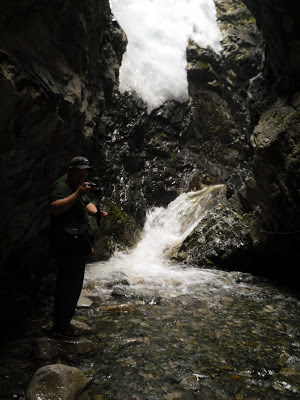 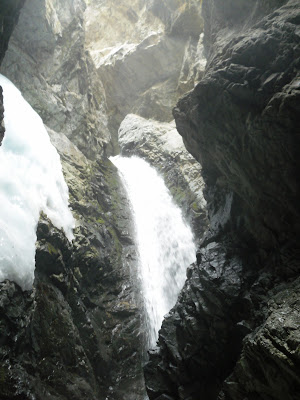 Looking up at the waterfall, I almost forgot that my feet were frozen.  It's a small area and gets crowded very quickly, so I felt kind of rushed to get in, get the pictures, and get out.  On the way out, we both gave up on trying to tippy-toe our way along the rock wall and just walked downstream. 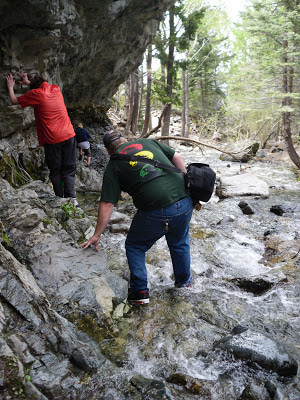 When my feet got too cold, I'd step up on a couple of rocks to let the water drain out of my shoes and warm my feet up.

Strangely, I ran into a lady who saw my BodyBugg on my arm and asked about it out of the blue.  Weird.  And totally random, but she was super excited about it and went on about how she wanted one.

Since our feet were already wet, I made Jay pose for some pictures before we headed back down to the car. 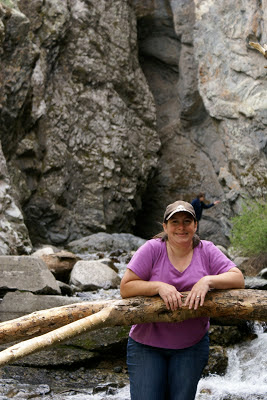 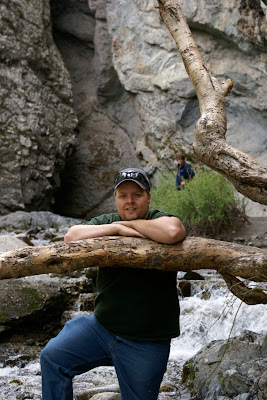 We saw a cute little friend hoping for a handout just as we were getting ready to go back down to the car. 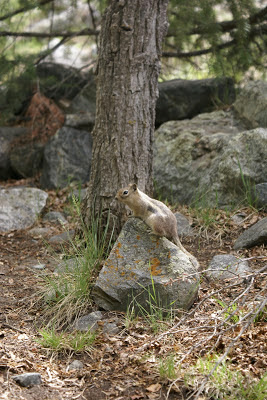 It was a great day, even if it meant that we spent twelve hours in the car.  Next time, we'll make plans to camp there so we don't feel so rushed.

I was so excited about it that I immediately told Nebalee she *had* to take the kids.  Really, I kind of hounded her until she agreed that they'd pack up the kids and go next week.  Other than gas, it's an inexpensive trip.  $3/adult to get into the Sand Dunes and Zapata Falls is free.  I'm so glad I was flipping through that tourist book and came across the "Best Kept Secrets" section.
Posted by GunDiva at 11:52 AM

We have passed by there so danged many times and promised to 'just go' one day - and still haven't. Everyone tells us it is so worth it; now you, too. So maybe this fall....
Mom

Once Upon an Equine said...

We went there for the first time a couple of summers ago and would love to return with the grandkids. Isn't it fun to stand in the shallow river and feel the sand moving beneath your barefeet? We also visited the nearby alligator park in Mosca. Looks like you had a fun trip!

Wow, that does look like a really great day! Beautiful scenery.